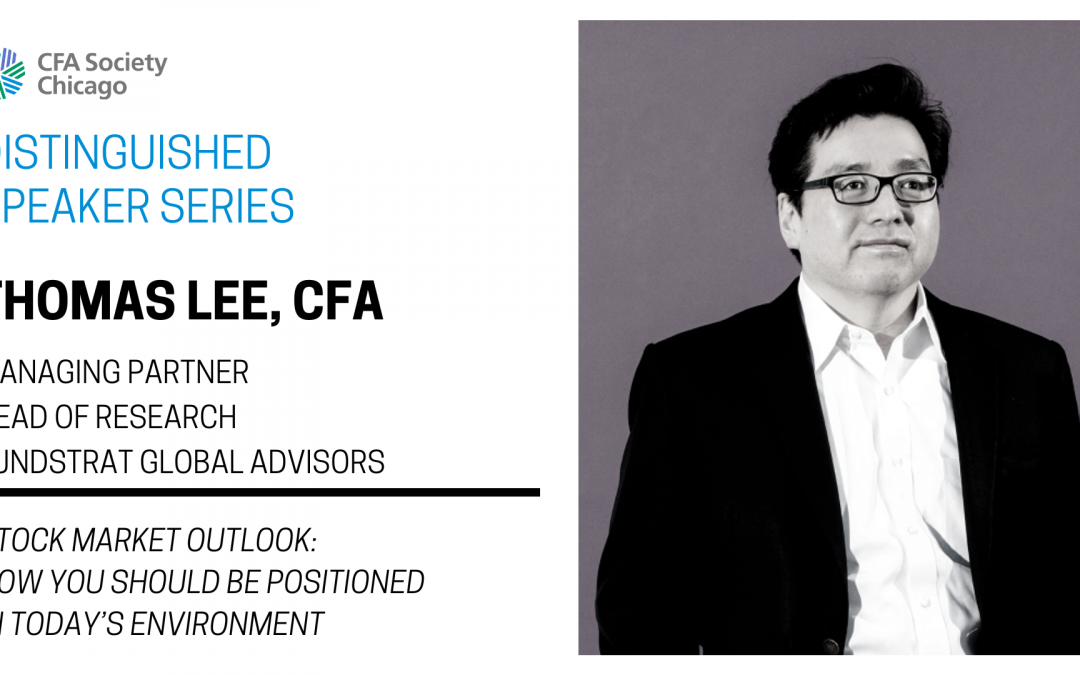 The Distinguished Speaker Series Advisory Group hosted Thomas Lee, CFA, at the Chicago Club on May 10, 2022.  Lee, co-founder, managing partner and head of research at Fundstrat Global Advisors and FSInsight.com, has received the top rank in the Institutional Investor survey in every year since 1998.

While the US equity market has been through two corrections already in 2022, Lee believes that we are experiencing a growth scare, not the initial phase of a bear market. Lee presented a graph of the Dow Jones Industrial Average since the 1930s in which he noted three instances of 15 – 20-year bear market consolidation phases, during which the index was flattish. Not only does he think there is not such a period of flat returns in store through the mid-2030s, but he also predicts that US equity returns will accelerate over the next ten years, before possibly entering a 15 – 20-year bear market. Lee went on to say that he believes for a bear market consolidation phase to occur, another global region must be a stock market leader, at the expense of the US. He does not see this being likely as he views the US to be in a position of strength economically. In fact, the case for owning US stocks is stronger in May 2022 than it was at the beginning of the year according to Lee.

Lee addressed arguments that the S&P multiple is bound to contract as interest rates rise. His analysis showed that the P/E of the US market will be 17 – 18x, whether the 10-year yield is at 2% or 5%.

Lee commended the Federal Reserve for achieving in one rate hike what has taken two years to accomplish in previous tightening cycles. Lee measures the Fed’s success by the current level of the 10-year treasury yield as well as mortgage rates. The Fed increased the federal funds rate by 25 bps and the 10-yr yield rose 130 bps.

Lee attempted to refute the popular notion that the labor market is very tight and shared at least three reasons why the market is not as tight as it appears. First, the retail sector, which has added the most jobs since 2019, has over-hired employees to have excess capacity in case employees were sick/quarantined with COVID-19. Perhaps this sector will not run with excess labor capacity forever. Second, as a result of higher interest rates or increasing risk aversion, funding for venture capital is drying up. Lee alluded to rumors of layoffs in Silicon Valley, which would add more supply to the labor market. Finally, the retirement of baby boomers (which has reduced labor supply for many years) will soon be offset by the entry of younger generations into the labor force. The take-away from Lee is that wage inflation may not be as bad as feared, because the labor market is not as tight as what is generally being perceived.

During Q&A, Lee addressed cryptocurrency, one of his preferred areas of investment. He told the room full of CFA charterholders that it is logical for us not to understand crypto as you can’t value it by traditional methods. He drew an analogy between cryptocurrencies and wireless communications in the 1990s, saying that the market did not grasp the “hidden” value of wireless spectrum then as it does not understand the value crypto represents today. Lee asserted that the traditional banking industry is a net cost to society. He intimated that crypto would obviate the need for companies to hold working capital and would materially reduce the average American’s spending on traditional banking services. Time constraints prevented Lee from going into greater detail on these figures.

Lee covered a great deal of material in a short time.  He offered some contrarian viewpoints and was clear in his conclusions, offering compelling supporting evidence.