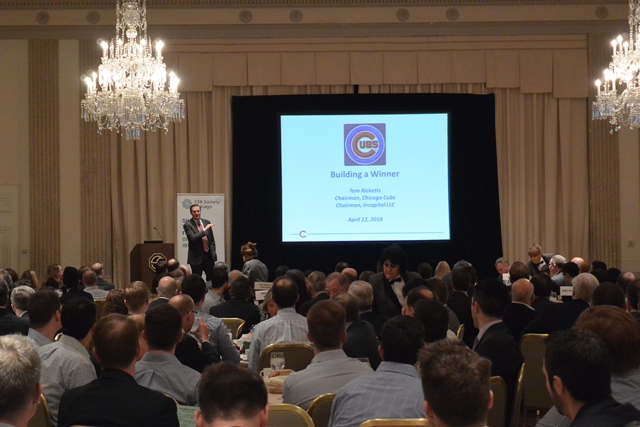 Chairman of the Chicago Cubs and Incapital LLC, Tom Ricketts, CFA, speaks to local financial and investment professionals at the Standard Club on April 12, 2016.

After his family acquired the Cubs in 2009, Tom Ricketts, CFA, found the storied franchise in disarray. Despite not winning a World Series championship in over a hundred years, the team continued to pack fans into historic Wrigley Field. But with the 3rd highest payroll and the 2nd worst record in the National League in 2011, success didn’t seem to be just around the corner. In a presentation to CFA Society Chicago, Ricketts offered his playbook for turning the perennial “Lovable Loser” Cubs into a championship-caliber squad in just five years. 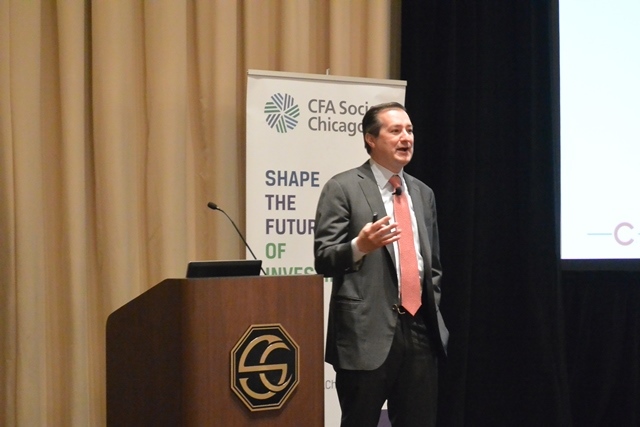 “Every single day I wake up and think about winning the World Series” – Tom Ricketts, CFA

As the team’s new owner, Ricketts put forth three goals for the organization:

“Every single day I wake up and think about winning the World Series,” said Ricketts. He shared an interaction he often has with older Cubs aficionados: a fan approaches and tells him “Mr. Ricketts, I’m 70 years old and a huge Cubs fan, can you please win the World Series before I die?” To which, Mr. Ricketts typically responds, “Well, how’s your health? Are you exercising and eating healthy?” 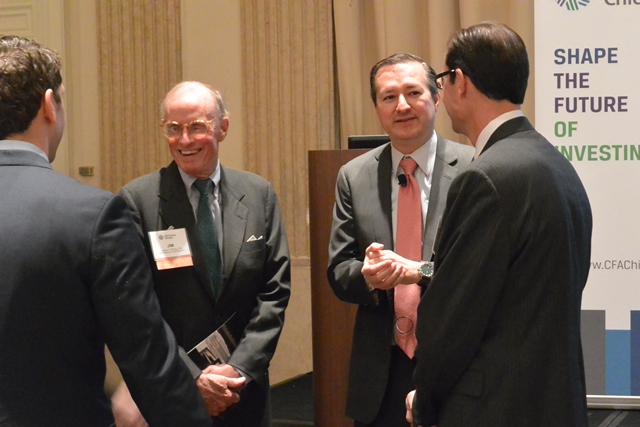 When Theo Epstein was hired as General Manager, the Cubs had a poorly ranked farm system and a very old, overpaid team. The Tribune organization, which Ricketts reckoned wanted to win as much as any owner, seemed to focus on short term success and viewed each season as a “discrete event”, hardly the way to build a championship team in his opinion. The Cubs executives began their quest for a championship by looking extensively at data. One thing they found was that the correlation between regular season winning percentage and playoff winning percentage is often somewhat low. In fact, many Wild Card teams haveended up winning the World Series in the past decade. Ricketts interpreted this as regular season records not mattering as much as simply reaching the playoffs for a chance to win.

Another insight that came out of their research involved the relationship between payroll and winning. A commonly held view by the media is that if you spend a lot of money on talented players, you will win a lot of games. Sports writers often consider payroll expenditure a good proxy for a franchise’s commitment to winning. After analyzing the data, the Cubs management realized that this simply wasn’t true. 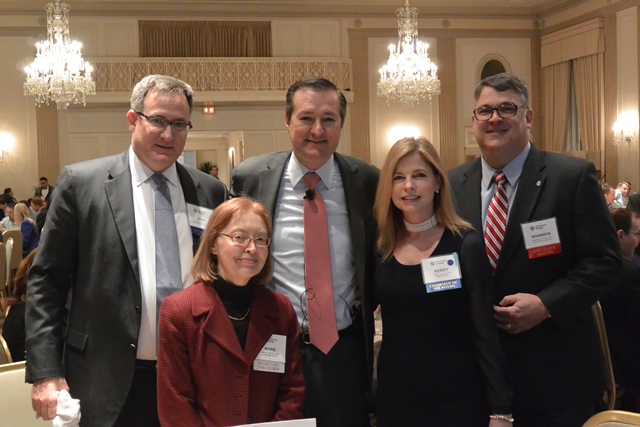 “Correlation between payroll size and winning percentage is much lower than you’d expect. You can’t just go out and buy wins,” Ricketts said, proving his point with a graph of the two variables’ low R-squared (a measure of goodness of fit of a model). The correlation between high payroll and winning percentage has subsequently declined even further in the past few years. Ricketts sought to understand why that might be. He found his answer in Major League Baseball’s contract system, which divides a player’s lifecycle into three phases:

During the MLB debut phase, players often earn far less than their fair value. For instance, last year’s NL Rookie of the Year Kris Bryant will earn just $652,000 in 2016, despite batting more home runs than all but 13 players in the National League in 2015. Meanwhile, 35 year-old Curtis Granderson was less productive than Bryant, finishing with 29 fewer RBIs in 2015, yet is paid over 20 times the amount Bryant receives. This shows the asymmetry between production and cost that Ricketts says can hamper teams’ efforts to win. 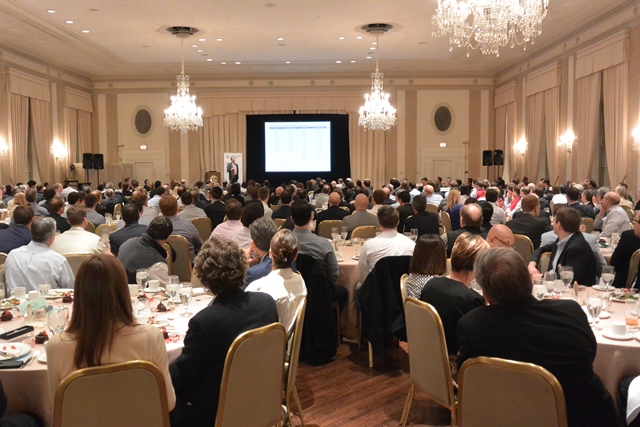 The Distinguished Speaker Series luncheon featuring Tom Ricketts, CFA, was one of the largest with more than 350 attendees.

The arbitration phase was characterized by Ricketts as a presentation by a player’s agent saying effectively that the represented player “was probably the best player on the team, and should receive an appropriately massive salary”, while the team’s presentation would sound more like “This individual shouldn’t even be in baseball and is fortunate to receive anything at all.” Following both presentations to a neutral arbitration panel, teams and agents will often meet somewhere in the middle on salary.

After six years following the debut and arbitration phase, salaries finally become lucrative as Major League Baseball players enter free agency. The problem for a team is that by the time a player reaches this stage, their Wins Above Replacement value (Wins Above Replacement, or WAR, is an overall measure of a player’s production and value) has typically peaked, and teams end up overpaying heavily for aging, declining talent. This was the case with the Cubs team that the Ricketts family inherited from the Tribune Corporation.

A slide charting the average players pay alongside WAR was shown, depicting a huge mismatch between value and pay early and late in a player’s career. The left portion of the chart (early on in a player’s career when their value to their team exceeds their pay) indicated an economic surplus for the organization, while the right portion of the chart (when a player’s pay exceeds value-added) showed an economic surplus for aging players. Puzzlingly, free agents sign the most lucrative contracts of their careers almost exactly when their production begins to slow down.

Another factor exacerbating the effect of low WAR relative to salary in players’ later years (i.e. free agency) is the growing practice of teams giving young, highly talented players longer contract extensions. Buster Posey’s 8 year, $167 million deal at age 26 was used as a good example of this. The net effect of longer contracts for star players is that quality players are entering free agency at an older age, when their WAR has typically peaked and their talents are in decline. Given these developments, it has become harder and harder to “buy a winner” and simply acquire high-priced free agent talent in order to win the World Series.

In light of that information, what were the Cubs to do in order to build a winner?

Their solution: focus on building a core of young, homegrown talent.

A number of other problems plagued the Cubs in 2011. According to Ricketts, the team had perhaps the worst facilities in Major League Baseball and didn’t have a clear philosophy on how to play the game. The Cubs developed the following plan:

The Cubs made a series of trades focused on length of control and getting younger, often moving older, more established players for prospects. The average age of their traded players was 31, compared to an average age of 23 for players received in trades. Ricketts reviewed several recent Cubs moves. According to the Cubs Chairman, the trade for Jake Arrieta was “the best trade in the history of mankind”, which was met with laughter and smiles by the audience.

After shedding older players and their costly contracts, developing prospects was the next key part of the Cubs strategy for sustained success. Ricketts noted that 24 out of 50 players playing in the 2015 World Series between the Mets and Royals were homegrown talent – players who had come up through each team’s farm system. The Cubs aggressive moves to cut older players and focus on improving their pipeline paid off in a big way. By 2015, ESPN reported that the Cubs had the #1 farm system in the MLB. In just five years after beginning a rebuilding effort in 2011, the Cubs entered the 2016 season with the most talented squad in the Major Leagues. 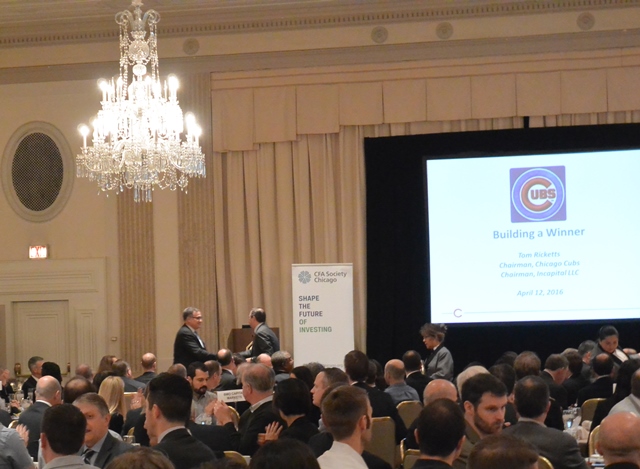 On rooftops, Ricketts opined that it’s a difficult business situation when people across the street have access to your product for free. The practice of watching games at Wrigley on Waveland and Sheffield avenue rooftops began organically, with residents bringing up a cooler of beer and occasionally inviting a friend over to watch the game. Then some enterprising individuals began charging fans to go up on their rooftops and take in the Cubs, forever changing the rooftops into a commercial endeavor. The Tribune Corporation viewed rooftops as a threat and moved to block their view of the field. Rooftop owners responded by petitioning the City of Chicago to assign landmark status to three distinct elements: the marquee, the scoreboard, and most critically for them, the “natural slope of the bleachers”. The last item effectively prohibited the Cubs organization from blocking the rooftops’ view. Now, Ricketts said, the Cubs have made peace with the rooftop owners, their presence being one of the most distinct aspects of watching a baseball game at Wrigley Field.