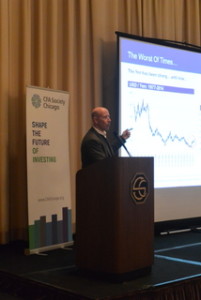 Barry Sternlicht was the featured guest at the Distinguished Speakers Series held on Nov. 21 at the Standard Club.  Sternlicht is the Chairman & Chief Executive Officer of Starwood Capital Group, a private investment firm he formed in 1991 focusing on global real estate, hotel management, oil and gas, energy infrastructure, and securities trading.

Using an inordinate number of slides Sternlicht gave a sweeping account of just about everything that related to the global economy.  His remarks covered a range of investment topics including; the domestic housing market, New York City property prices, currencies, quantitative easing, oil prices, global real estate valuations, and the 2015 outlook for the U.S. and global markets.

Sternlicht ended his presentation by taking questions from the audience and sharing details of his latest hotel and apartment project – the ultra-luxury Baccarat Hotels and Resorts development in midtown Manhattan.  This development underscored several of the points Sternlicht made earlier – premium properties commanding outsized rents, and investing in world-class cities for outsized returns.