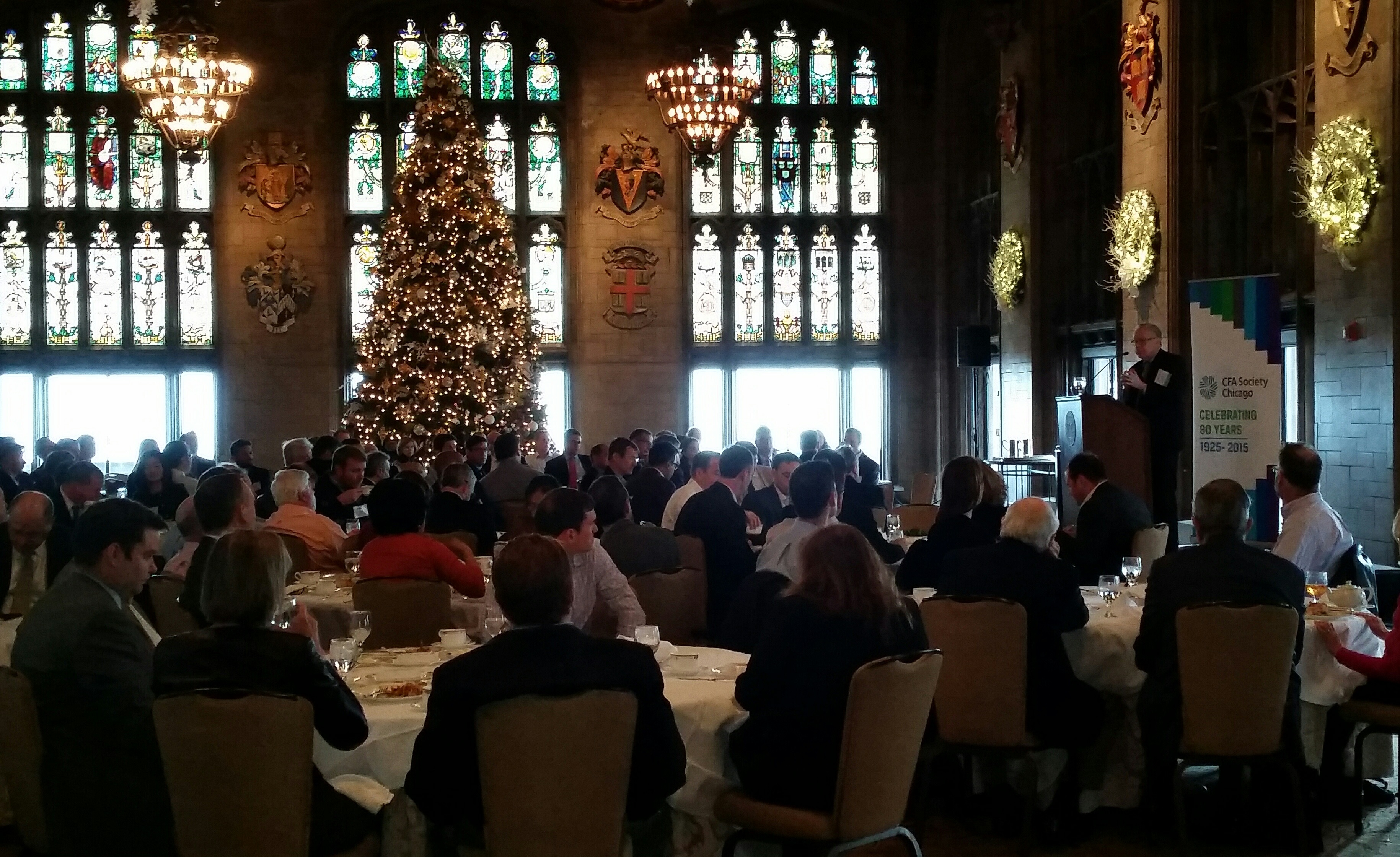 Dan Fuss, CFA and former member of the CFA Society Chicago, spoke to a packed house at the University Club of Chicago on December 3. Fuss has over five decades of investment experience and joined Loomis, Sayles & Company in 1976. He’s Vice Chairman of the firm’s Board of Directors and manages the firm’s flagship Loomis Sayles Bond Fund, as well as a number of other fixed income offerings. Fuss has earned numerous accolades over the years including Morningstar’s Fixed Income Fund Manager of the Year, the Institutional Investor Money Management Lifetime Achievement Award, the Lipper Excellence in Investing Award, the CFA Society Milwaukee Lifetime Achievement Award, and was named to the Fixed Income Analysts Society’s Hall of Fame.

During his talk, Fuss focused on what he calls the Four Ps: Peace, Prosperity, People, and Politics. Starting with peace, he discussed the growing conflicts in the Middle East, Eastern Europe, and South China Seas. While he brought up the Cold War and the challenges faced by governments and leaders then, he remains optimistic about the issues facing the world today. Fuss believes that world leaders can work together to solve these problems.

Fuss also believes that in the United States, despite a gridlocked Congress with little appetite for increased spending, the nation’s share of military spending is likely to rise, especially given the geopolitical climate. That’s “prosperity,” or lack thereof. With rising military spending, the government will need more revenues and those revenues can come from two sources: debt and taxes. Higher taxes, he says, will push more investors to favor tax-exempt muni bonds and which will have implications for the taxable bond market.

Fuss’ “people” is focused on changing demographics, which is not just a challenge faced by the United States.  All developed countries are aging and those aging populations require more resources, especially healthcare, which is another reason he expects taxes to increase. Fuss also believes that this demographic shift will increase the demand for bonds because private and public sector defined benefit plans will need to rely more heavily on bonds, rather than stocks, for liability matching.

As for politics, Fuss was not optimistic. He believes the Senate and the “ruckus” House will continue to be unable to deal with serious issues facing the country. This means the United States may be a ways from solving some of the issues facing it today, including the demographic shift and the resulting impact on government revenues.

Though not an official “P,” Fuss also talked briefly about the Federal Reserve. He noted that, despite the Fed’s domestic mandate, it has been more transparent about its consideration of global issues in determining the timing and magnitude of increasing interest rates. While many believe that if the Fed doesn’t raise rates this December it won’t move in 2016 because it’s an election year, Fuss disagrees. That said, he believes the chance of a rate hike in December remains 50/50, despite the recently positive statements by Chairwoman Janet Yellen. In all, Fuss anticipates a slight upward pressure on interest rates and a slight downward pressure on P/E ratios because of these aforementioned “Ps” and is positioning his portfolios cautiously.