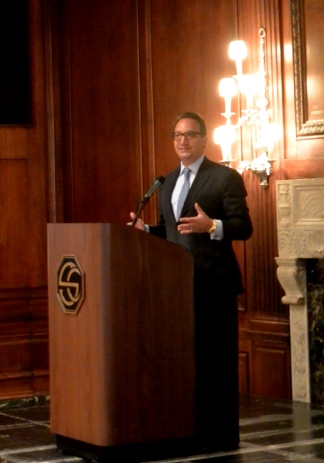 Jason DeSena Trennert provided his thoughts, observations, and market predictions for 2016 to a sold out audience at the Standard Club on January 13th.

Trennert first addressed the drop in the market that coincided with the start of the year. He noted that historically the first weeks of January are generally a poor predictor of total year performance. He then addressed recent market commentary suggesting the United States is headed for a recession. There are three things that can create or cause a recession:

While not agreeing with current fiscal/monetary policy, Trennert did not consider the current policies so bad that they would push the country into recession, and with a current inflation rate around 5%, he found no reasonable catalyst for a 2016 recession. Trennert asked rhetorically why do people feel lousy and think the outlook in the near term is for a recession when we have; a continuing fall in unemployment, wage growth acceleration, and lower oil prices? The short answer is the 24 hour news cycle that focuses on the negative and unlikely (such as 2016 recession) instead of the longer-term view of expected growth.

Expanding his point of view on monetary and fiscal policy, Trennert pointed out an inefficient policy mix. Over the past eight years the Fed has used an easy monetary policy, while fiscal policy has been that of tight regulation brought on in large part by Dodd/Frank legislation. This combination has favored financial risk taking over economic risk taking or capital investment. In this period companies have received more credit for uses of cash that were more accretive (share repurchases and M&A) than they have for long-term investments like capex. Frequently changing government policies make long-term planning difficult. 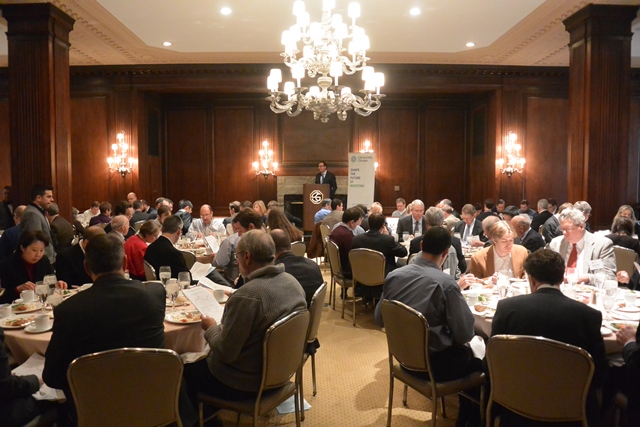 Trennert also provided his thoughts on why the stock market will likely go up in the next few years. The number of companies listed on U.S exchanges has fallen from over 8,800 in 1997 to 5,300 in 2015. Simple supply and demand could provide the continuation of the rally of high-quality stocks. Today there are simply fewer stocks being chased by more dollars. Why aren’t more companies going public? Regulatory costs of being a public company along with the growth of the private equity industry could account for the relatively small number of companies deciding to go public.

The audience was given the opportunity to ask several, wide-ranging questions including; what is the best catalyst for continued growth? Trennert – Tax reform (an overall reduction in the tax code) would provide the biggest, most effective impact to growth in the economy. Tax code simplification would provide companies certainty with regard to long term investments which would help spur economic growth.