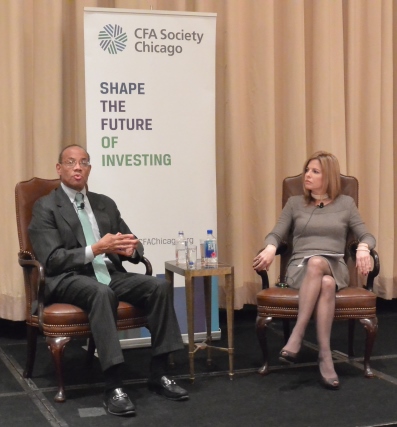 In a wide-ranging question and answer session, Mr. Rogers responded to questions concerning the role of the Board of Directors of public companies, investment committee best practices, the best measure of investment success, and the current state of the market.

Mr. Rogers’ thoughts on what “best practices” should be for Investment Committees can be summarized as follows:

Investment performance needs to be monitored; however Mr. Rogers stressed that successful short-term performance does not mean that you are outperforming.  More than a three-year track record is required.

When asked about his key thoughts about the current market Mr. Rogers stated that this is a stressful period similar to 2008-09 and that during this period, it is important to keep in touch with “thought leaders” to see what they are thinking.  Analysts must remain free to recommend anything even though it may be out of favor.

Mr. Rogers stressed that the city culture of Chicago is one of “giving back”.  The Ariel Community Academy is a school in Chicago that fosters financial literacy.  This is knowledge that is sorely lacking, especially in minority communities.  Mr. Rogers, who became interested in stocks at an early age, thinks it is important to get kids to think about stocks.

Questions from the audience centered on active versus passive management and the future of mutual funds.  Mr. Rogers believes that a large portion of any portfolio should be in index funds and wondered how hedge funds can outperform in this market given their fee structure.

Mr. Rogers also believes that despite the emergence of ETFs and other investment instruments, there will always be a role for mutual funds in any portfolio.  There is a role active management can play.  Mr. Rogers concluded with the thought that he is optimistic on the market and there are big bargains out there to be found.