Don Wilson, DRW Founder, on Why Cryptocurrencies Will Change

Over 200 professionals joined CFA Society Chicago for the February Distinguished Speaker Series luncheon at the W in Downtown Chicago to hear Don Wilson opine on one of the most popular topics in the financial industry today—the $450 billion cryptocurrency marketplace. The mood was focused and inquisitive, as Wilson, the founder of DRW Trading, doesn’t make public appearances often and rarely talks about the relatively new financial asset class of cryptocurrencies. Wilson’s vast knowledge in the relatively lesser known field can be attributable to researching the marketplace since early 2012 and eventually forming Cumberland in 2014, a subsidiary of DRW Trading, to provide market making services as well as hold principal positions in crypto coins and tokens. Today, Cumberland is one of the largest OTC liquidity providers in the cryptocurrency market.  I believe it is safe to say that Mr. Wilson was one of the earliest to have a vision of what a world of cryptocurrencies could look like, which makes his view on the future of this space very interesting.

Wilson echoed that in 2017, an inflection point was reached in the cryptocurrency market.  Bitcoin rose from $963 at the beginning of 2017 to close the year at $14,679—a roughly 1,500% increase that largely took off in the final quarter of 2017. In September of 2017, the CBOE and CME launched futures contracts for Bitcoin giving the asset a much larger and more sophisticated institutional audience. Even the most novice cryptocurrency investors – including those family members talking about it over the holidays —were talking about the price of bitcoin and the hottest new cryptocurrency they got wind of. Although we should pay close attention to the price of bitcoin because it was the first pioneering technology and currently is the largest coin by market cap, Wilson argued that by only doing so we would be missing the bigger picture of cryptocurrencies. The marketplace would also agree with his point.  For reference, in 2013, bitcoin made up 95% of the overall market cap of the cryptocurrency market. Today that number is closer to 40% of total crypto assets. 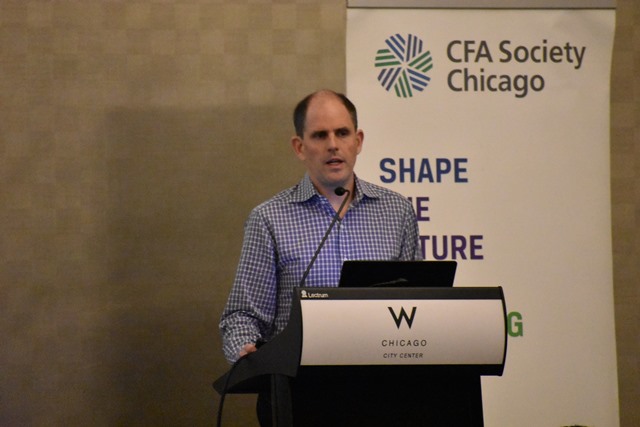 The technology behind Bitcoin known as the blockchain is predicated upon a framework that enables the transferring of value to anyone in the world without having to go through a centralized agent, today, most commonly known as a bank. Cryptocurrencies instead operate on a decentralized and/or a distributed platform. Benefits of switching form a centralized environment to a decentralized/distributed environment is it removes the need to trust a single organization to both hold your assets and control transfers in and out of your account. The decentralized system creates a much more resilient network that could operate even if one node of the structure went dormant. In a centralized system, if for example a bank is hacked or loses data, the entire system falls apart. In a decentralized/distributed system, there are thousands of independent “verifiers of the truth”, also called “bitcoin miners” who validate transactions for the price of small transaction fees.

Beyond bitcoin, there are other types of cryptocurrencies called utility tokens that are the result of ICO’s (Initial Coin Offerings) which raise money with a particular purpose or intent. Wilson believes it is the utility tokens that will have the most meaningful impact on the world going forward. Some examples he noted were Iota (MIOTA) and Civic (CVC). Iota is controversial because the underlying technology of the blockchain is different from Bitcoin. The Iota token was created in an attempt to solve the problem of how machines connected to the internet communicate to one another. For example, your household appliances will eventually all have the functionality internet connection and Iota embarks on how these appliances can communicate to one another in one language. The Civic (CVC) token is another example that in intended to facilitate identity validation. For example, Civic sets out to validate the presence of someone who lives in a remote country that may not have a birth certificate let alone a bank account, but they potentially have an internet connection that can confirm identity and allow for a financial transaction to occur. 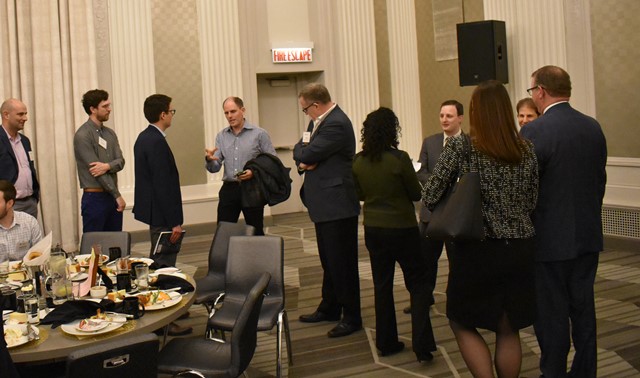 There was ample time left for questions and as expected, most questions were in regard to what we should expect for the future. Wilson said we will continue to see great institutionalization of not only Bitcoin but all utility tokens. Investors are finally coming to the realization that the blockchain technology is here to stay and can be beneficial to societies in meaningful ways. When asked if we’ll be handing in our greenbacks for electro crypto tokens, the answer was that we probably shouldn’t expect that anytime soon as they are “unlikely” to replace standard government-issued currencies. Further, we can expect greater regulatory overview going forward which may have initial negative price implications in the very near term but should be positive longer term to strengthen the element of trust in the market place. Greater regulation, further institutionalization, and a nice near-term pull back might be all I need to buy my first (or likely only partial) bitcoin.