ESG and the Evolution of Corporate Engagement 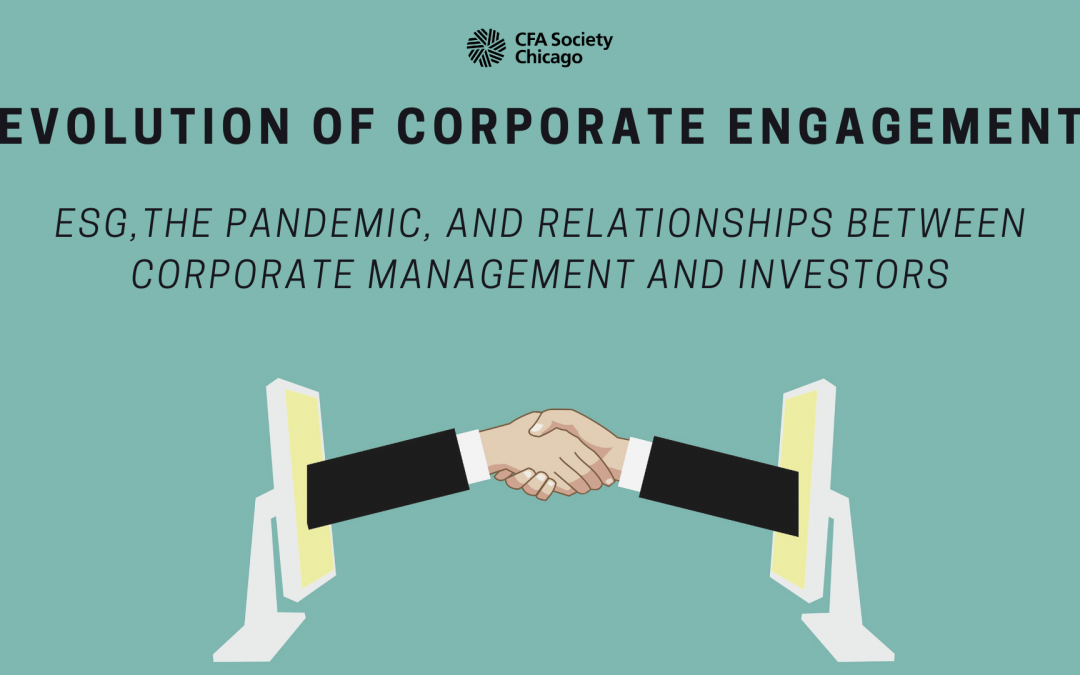 On June 16, 2021, David Sekera, chief US market strategist at Morningstar Research Services LLC, moderated the webcast “Evolution of Corporate Engagement,” which addressed two topics. First, how has the shift from in-person meetings to virtual interactions affected the engagement between the buy-side and company management teams, and what changes, if any, do the panelists anticipate over the next year? And second, how has traditional engagement between the buy-side and issuers changed in recent years as Sustainability and ESG has become more central to investors?

Sekera began the event with two survey questions for the audience. The results of the first question indicated that meetings with company management teams are important in the investment process of the respondents. The second question showed the audience’s preference for in-person, rather than virtual, engagements.

Dunlap explained that the use of virtual meetings has allowed Mondelez to meet more investors and to do so more frequently. Doing 7-8 meetings per day without leaving your desk, while accessing investors in any country or city, has made the investor relations function more efficient. Dunlap does not expect face-to-face meetings until 2022 and believes investors have grown quite comfortable with video calls.

The Capital Group is gearing up for a return to travel to meet company management teams, reported Cheng. In-person meetings with management remain important, especially when there is a potential change in Capital Group’s thesis. Standard quarterly updates, however, can comfortably be done virtually. Cheng said that Capital Group investors will attend Investor Days as companies return to a physical format.

Hoeppner began by explaining that his group’s main engagement goal is to raise the standard (of Sustainability and Engagement) across the market. For Hoeppner and his team, workflow has not changed much from that pre-pandemic, as they did not conduct many on-site or face-to-face meetings. Deep-dives on certain topics may call for an in-person engagement, but such activity is relatively rare for Hoeppner.

Sekera asked the audience two more questions, with a focus on Sustainability and ESG. Responses to the first question indicated that ESG and Sustainability have become more prominent for most members of the audience.  Forty percent of respondents answered that the focus on ESG at their firm has increased “Significantly” over the last year, while 14% said the focus has not changed much. The second question asked the audience their main purpose of engagement with issuers. Just over 40% of respondents use engagement at least in part to influence company management teams, whether on ESG or Financial issues. The remaining 60% use their engagement opportunities for due diligence on Financials or ESG, but do not seek to influence the company’s behaviors.

Sekera asked Hoeppner to describe the role of sustainability manager. Hoeppner summarized various aspects of his job: one-to-one company engagements, engagement with companies in collaboration with other investment managers, proxy voting, regulatory (federal and state) engagement, and informing an ESG score that LGIM’s investment team uses for purposes of capital allocation. The heart of what Hoeppner does is to influence companies’ behaviors, with the goal to broadly raise the ESG/Sustainability bar across all public companies.

Sekera turned to Cheng to address how Capital Group incorporates ESG/Sustainability within the investment process.  Cheng explained a three-pronged ESG strategy. First are the investment frameworks, developed in-house jointly between the ESG team and equity analysts. Capital Group has developed over 30 sector frameworks.  Second is a monitoring process, where proprietary data and third-party analysis are used to analyze the investment teams’ portfolios and flag certain risks. The third component centers on Engagement and Proxy voting.   Cheng shared that Capital Group’s clients have higher expectations regarding ESG disclosures, adding that all RFPs now include questions on the topic.

Dunlap explained that while he spends considerably more time with Sustainability specialists today versus a few years ago, mainstream PMs and analysts are much more interested in ESG than they used to be, too. Dunlap described his IR team moving to offense on Sustainability and ESG more recently, as they better understand what education they need to provide for investors. Dunlap added that the management team has spent more time on engagement since the beginning of the pandemic, including that focused on Sustainability.

Sekera asked Hoeppner how he and LGIM influence the behavior of companies. More important than having their portfolio companies achieve a certain absolute ESG score, Hoeppner said, was seeing improvements in ESG scores. At the same time, LGIM has minimum acceptable scores for companies that they would invest in.

Sekera turned to Cheng for Capital Group’s attitude toward influencing behavior. Cheng explained that direct Engagement is her company’s method to influence behavior. Capital Group rarely divests companies from their portfolios when ESG standards are not met. Rather, Capital Group typically wants to engage with such companies when ESG concerns exist. She gave an example, however, where Capital Group avoided an investment due to ESG concerns. Although the company was perceived by the wider market as scoring high on ESG issues, Cheng stated Capital Group could not get comfortable with the low wages the company paid their factory workers, so they eliminated the company from consideration.

Sekera shifted the discussion to Exxon, and the extraordinary story of how a small activist shareholder, Engine No 1, created a consortium to place multiple members on the oil giant’s board of directors. From the IR perspective, Dunlap said the main lesson to him was to listen to shareholders. Engage and listen. He would expect more such attempts to place dissidents on Boards of Directors due to the successful effort at Exxon. Hoeppner, too, believes that more activists will emulate Engine No 1’s model: Small Stake + Big Partners + Be Very Public. Activists like Engine No 1 spend time to build relationships with investors, Hoeppner shared, with Engine No 1 securing early support from public plans in the US regarding its Exxon initiative. At Capital Group, all three proxy committees, representing the various equity groups within the company, voted with Engine No 1, Cheng shared.

The first question from the audience was addressed to Cheng. What do Capital Group’s investment and ESG analysts want to see from third-party Sustainability / ESG information providers? Cheng said more information is desired, which will be integrated into Capital Group’s investment process. Hoeppner asserted that ESG Ratings, as a product to be sold, is dying, because LGIM and others calculate their own ratings. However, echoing Cheng, Hoeppner believes there is great room for improvement in providing more relevant ESG data.

Greenwashing. What is it? How do you identify it? Cheng offered to define it, saying it is when companies embellish data or provide fake data to paint an unfairly positive picture. Capital Group relies on multiple sources of data to verify data provided by a company and compares data against that of a company’s competitors. Hoeppner is not concerned about Greenwashing. He believes the media is getting excited about the topic to throw cold water on ESG. If an investment manager has their own ESG framework, they will not be deceived by an issuer’s attempt to Greenwash, stated Hoeppner.

An audience member asked if Mondelez had issued Green Bonds. Dunlap said that, while Mondelez has considered Green Bond issuance, the company has not yet issued one.

What can we take away from today’s discussion? First, investors prefer to meet in-person, rather than virtually. The webcast audience expressed a marked preference for in-person meetings rather than virtual calls. This was echoed by Cheng, who said her investors are gearing up for travel once again. Second, based on the response of Cheng and Hoeppner, who together represent a few Trillion in AUM, investors want more ESG data on issuers. Increasingly, that data will be crunched by the investment managers themselves, rather than packaged by the information provider into an ESG score that is purchased. Finally, our panelists told us to expect more activist investors to take a page from Engine No 1’s Exxon playbook in future proxy votes. Mondelez’s Dunlap would tell the targeted companies to engage with these activists.  Engage and listen.