CFA Society Chicago hosted Blockchains – Disruptor, Panacea, and Reality, the first fintech event of a three-part series, focusing on blockchain technology and its applications. The event was held at The Chicago Club on January 17, 2018, attracting a sold-out crowd of over 200 people. The afternoon started with a keynote address and was followed by a panel discussion with industry members working in the crypto space. Those in attendance participated in Q&A session at the end of the event.

Wulf Kaal, the event’s keynote speaker and moderator, is director of the University Of St. Thomas Private Investment Fund Institute, a tenured associate professor of law at UST School of Law, a leading expert on hedge fund regulation in US and EU, and an industry expert in the cryptocurrency space. He initiated the event by gauging the audience knowledge and involvement within the crypto space, introduced blockchain technology and outlined the following event agenda: 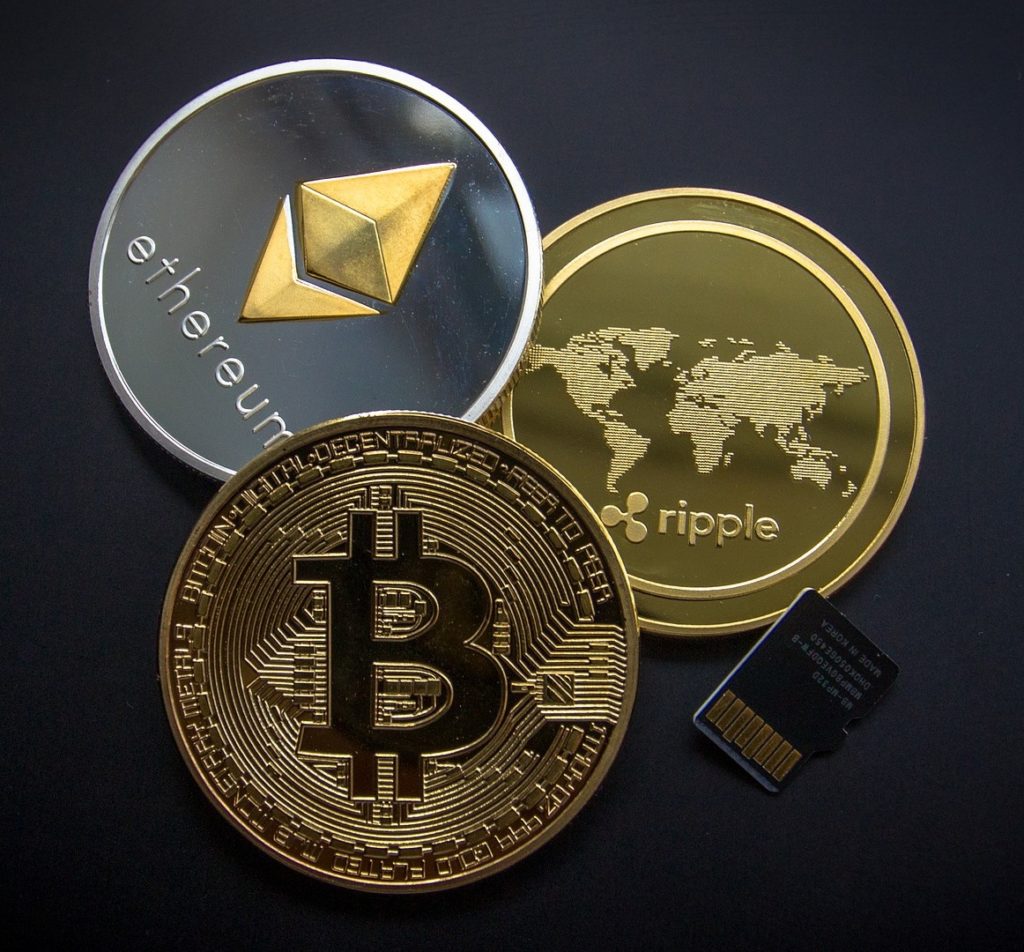 Kaal then continued to highlight the magnitude of growth possibilities within the crypto space. He displayed past year price data for Ethereum and Bitcoin (two of the most famous cryptocurrencies) and emphasized the fact that what has been seen to date can be thought of as linear growth and that exponental growth is expected by the industry. He also shared four years of ICO related market data showing a total fund raising of $6.4bn to date.

Kaal discussed how some market participants regard the rise of blockchain as a bubble; some audience participants share the same view. He went on to educate the audience with the crypto space, blockchain technology and its application beyond the talk-of-the-town cryptocurrencies like Bitcoin and Ethereum.

Moving on, Kaal educated the audience on blockchain technology stating that it is similar to “having an internet” like event. With “Code being the Law”, blockchain technology is self-executing. It is a decentralized public ledger where each block (or node) in the chain can be thought of as a sheet with the footprint of a previous page along with its information. Blockchain could be referred to as a peer-to-peer (P2P) network based upon “Trust” and “Disintermediation” with a copy of the ledger stored in different computers all over the world. The result would be a transparent decentralized economy. Constant additions to the blocks in the chain would require higher computing power to modify past blocks/nodes making it difficult or next to impossible to cheat/hack this system. Lacking scalability in applications at the moment, Kaal believes that whoever can figure out a way to apply blockchain technology to enterprise facing solutions will be the next “Google” of today.

By not being physical in nature and anonymous over VPNs (Virtual Private Networks), the use of blockchain ledger faces issues concerning lack of legal remedies and/or recourse in contrast to what we have today with internet related solutions. However, legal groundwork is being carried out to deal with such issues. 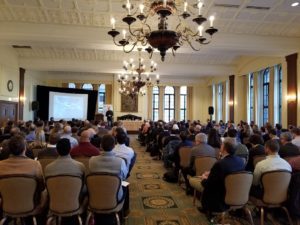 Continuing the discussion on law and blockchain, Kaal geared the discussion towards Smart Contracts which are self-regulating and self-executing contractual obligations. These contracts are inexpensive, automated by code, take only minutes to execute and have automatic remittance versus 1-3 days for traditional contract execution at a comparatively higher price with manual remittance. This reduces the need for lawyers due to the nature of the contract. When a smart contract is coded, it will end with an execution and cannot be stopped by either party. However, this could lead to some issues where unexpected circumstances occur in normal business transactions requiring flexibility from parties to the transaction. Kaal also briefly touched upon the different use cases of smart contracts with varying level of complexities. The industry expects banks to spend heavily in blockchain based solutions in the coming years. He predicted that settlements may very well happen one day using this technology platform.

Kaal then steered the focus towards the funding landscape within the crypto world. He discussed venture capital interest funding blockchain based start-ups in various industries ranging widely from Finance, Government, Consumer and Media. Next, he touched upon ICOs (Initial Coin Offerings) and how they stack up against traditional Venture Capital and crowdfunding sources in characteristics for start-up funding. Kaal shared market data on how since September 2016, Ethereum was the most popular blockchain for ICOs’ assets globally. The US leads the industry with the highest number of crypto start-ups globally followed by Europe and Asia. Russia on the other hand is leading in government support for the overall technology platform with state funded academy formation and by creating a more favorable regulatory environment than the US.

Proceeding to the next agenda item for the evening, the Kaal discussed a blockchain case study of a Loan Securitization. He compared the blockchain process to the existing loan securitization process and identified the following key benefits of the former:

The second half of the evening featured a panel discussion moderated by Wulf Kaal with speakers Colleen Sullivan, Zabrina Smith and Biju Kulathakal. Each of the panelists introduced themselves and discussed how they engage with the crypto space for their clients.

Colleen Sullivan is co-founder and managing member of Sullivan Wolf Kailus LLC, a boutique law firm based in Chicago that specializes in hedge fund, private equity, venture capital, digital assets and other alternative investment products. She discussed blockchain from a legal standpoint clarifying that ground reality for the regulatory environment is very different than what has been observed in the media. She recalled being present in South Korea when a reported surprise government “crackdown” on the crypto exchanges was merely an examination by Korean tax authorities on the tax implications of the crypto exchanges. She noted that governments are looking to exchanges to self-regulate in these unchartered territories.

Furthermore, Sullivan discussed various cases she has been working on for legal solutions around asset servicing, asset management and wealth management. Her firm has been leveraging blockchain technology for asset safety of their clients, efficient transactional authority and transparency, proof of value assessments, etc. 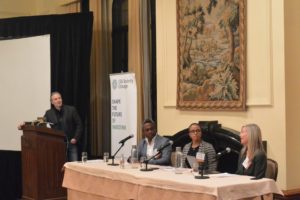 Next, Zabrina Smith, vice president within Northern Trust’s Market Advocacy & Innovation Research (MA&IP) team, introduced herself and described how she was working on researching ways to incorporate block chain technology to add value for global clients. Her team has been working with use cases around contracts, wealth management and other creative uses within the organization to add value and/or improve existing customer solutions. Northern Trust has been proactive in trying to apply the technology and has been working in the space as a pioneer to bring better solutions to its customers.

Finally the last panelist, Biju Kulathakal, founder of Halo Investing – first independent multi-issuer technology platform, introduced himself and described how his organization utilizes the blockchain technology for structured loans with options contracts. Halo Investing packages products from sellers like JP Morgan, Credit Suisse, and Goldman Sachs, and sells it to advisors like Schwab and others.

He presented an example of a typical transaction based on blockchain to illustrate the potential benefits like less documentation, quicker execution, lower costs and flexible issuance sizes when compared to traditional structured notes.

The session continued with questions from audience noted below: 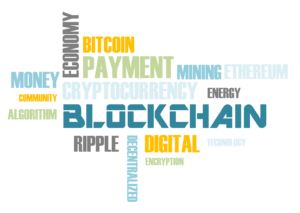 Implications/application of blockchain for lending securities?
Blockchain can leverage various functions including the following aspects of securities lending:
• Digital Identity; and/or
• Settlements (similar to implementation by Australian Stock Exchange)

Implications of blockchain for auditors?
Blockchain could be applied to automate life cycle processes reducing overall audit times and increasing efficiency for the whole process.

Benefits of leveraging blockchain technology to CDS contracts?
Blockchain based CDS contracts would be expected to be of a lower cost as no counterparty would be maintaining a ledger.