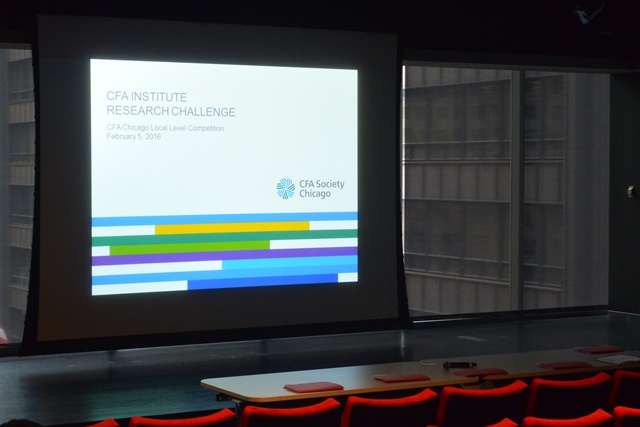 The CFA Institute Research Challenge is an annual global competition for university students who assume the role of a research analyst. This multi-round competition provides hands-on mentoring and intensive training in financial analysis. Students value a stock, write an initiation-of-coverage report, and present their recommendations to a panel of judges, each of whom is a Charterholder and a highly regarded industry professional. Chicago’s Local Level Finals was held on February 5th and included five teams from local universities. The winning team advanced to the Americas Regional Finals, which will be held the week of April 11th in Chicago.

Each team had 10 minutes to present their reports on Mead Johnson Nutrition which sells nutritional products for infants and toddlers across the globe. The firm sells most of its products in the United States and China and primarily focuses on infant formula. The teams were given wide latitude to use any financial modeling and business analysis tools they believed to be most appropriate to generate a target price and to make a buy/sell/hold recommendation on the stock. Following the presentation, the judges had 10 minutes to ask the teams questions about their research process and the results. Teams were assigned colors to disguise their university affiliations. 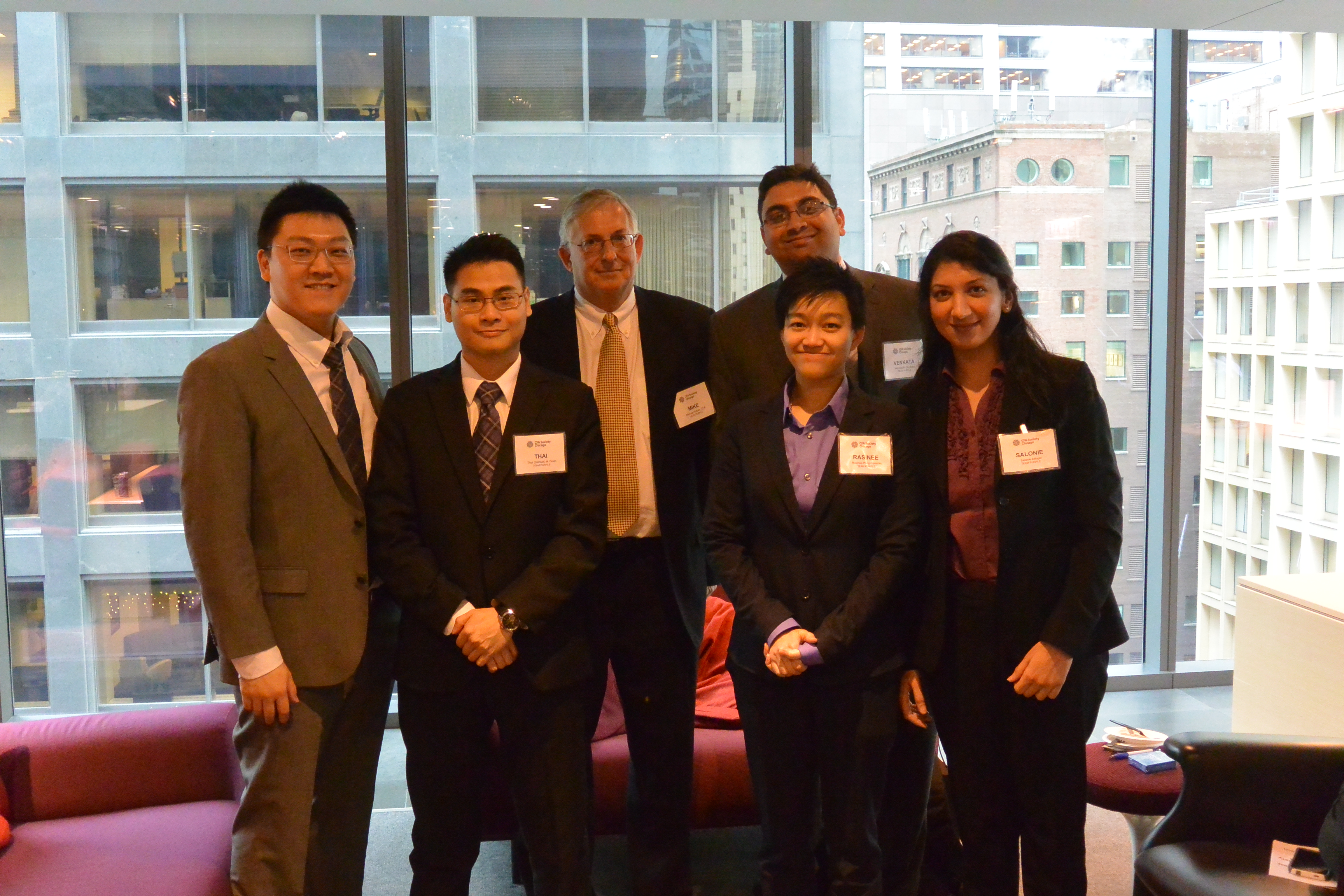 The Purple Team (Illinois Institute of Technology) went first, focusing on Mead Johnson’s brand loyalty among customers as well as the growing Asian market. A detailed projection of the firm’s financials and a SWOT analysis were among the modeling tools used to determine a target price of over $93 and to issue a Buy recommendation on the shares. Drivers of their positive view included the lifting of China’s one-child policy, a strong brand presence in the U.S. and Asia, good customer loyalty, extensive supply chain and distribution channels, a robust financial position, and their belief that  the firm’s introduction of more premium priced products would add to the bottom line. 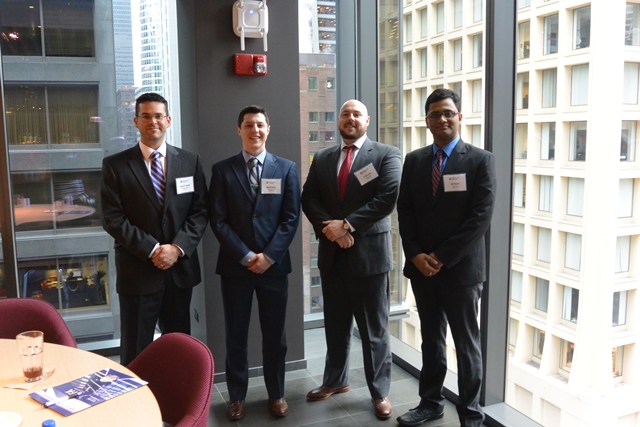 Next, the Blue Team (University of Illinois at Chicago) issued a Hold rating with a target price of $76. Positives for the firm according to this team were the lifting of the one-child policy in China, low dairy costs, and high brand loyalty, but they had concerns about downward currency pressures on the Yuan. The group’s valuation analysis combined a discounted cash flow analysis with relative comps among similar firms, including price to earnings data. They also included a scenario analysis, focusing on currency movements. In all, they believe that Latin America and Asia have strong growth potential for the firm, but have concerns about currency headwinds. 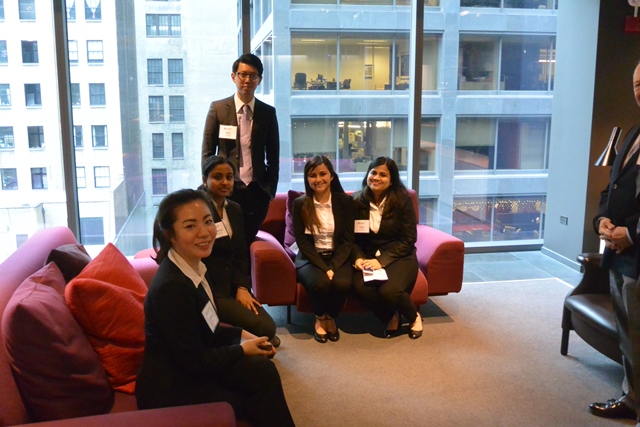 Team Orange (University of Illinois at Urbana–Champaign) also issued a Hold rating with a target price of $78. They pointed to China’s one-child policy as a potential positive, but noted that a rise in breastfeeding could put pressure on the firm’s sales. The team noted that revenues and EBITDA have been growing, but the rate of growth has slowed. They also pointed to volatile currency movements as a risk factor for the firm. Multiple valuation models were used, including comparing similar segments of competitors and Monte Carlo simulation to generate a price target range. Finally, they used discounted cash flow models to pinpoint their target price. 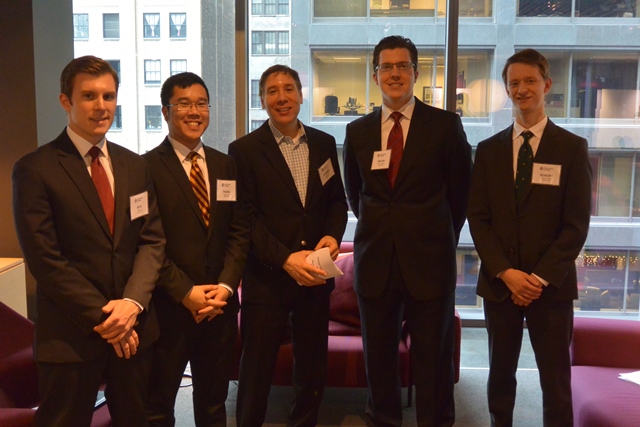 The Gold Team (Loyola University Chicago) was decidedly more positive on the firm, issuing a Buy recommendation at $83, but noted that this recommendation was an upgrade from their initial Hold based on recent share price decline. The team determined that industry rivalry was a critical factor for the firm to contend with and pointed to a new contract with the U.S.’s WIC program which will help the firm’s products gain more shelf space in those markets. Valuation models used by the group included discounted cash flow, multiples valuation, and dividend discount. Before closing, the team noted the firm faced some head winds including commodity prices, foreign exchange risk, and a slowdown in China. 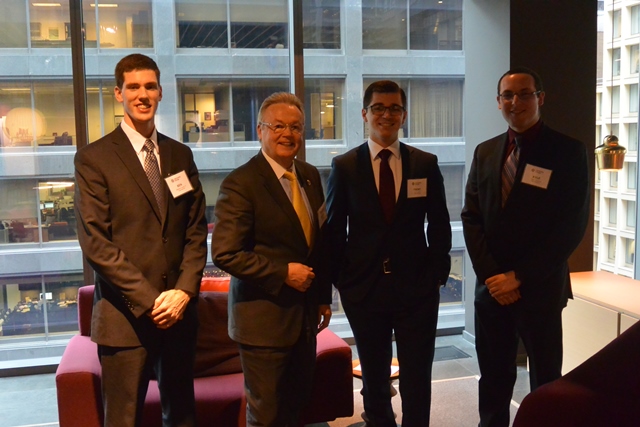 The final team, Brown (Valparaiso University) was the most pessimistic of the five groups and issued a Sell recommendation with a target price of $27. This team believes the threat of substitution is very high and was most concerned with the rising popularity of breastfeeding. They also believed the firm was pinning a lot of hope on the rising share of revenues from the Asian market and said the elimination of the one child policy may not have as big of an impact on increasing the birth rate as many believe. Their price target was built around a risk-adjusted discounted cash flow analysis which took into account a “macro risk” which upped the discount rate significantly. 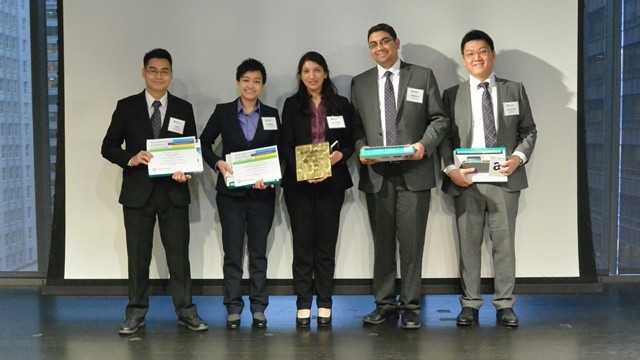 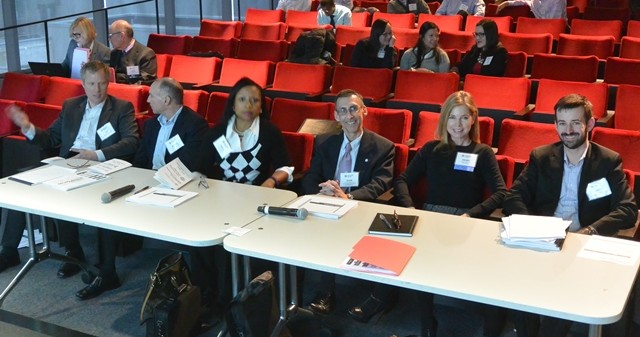