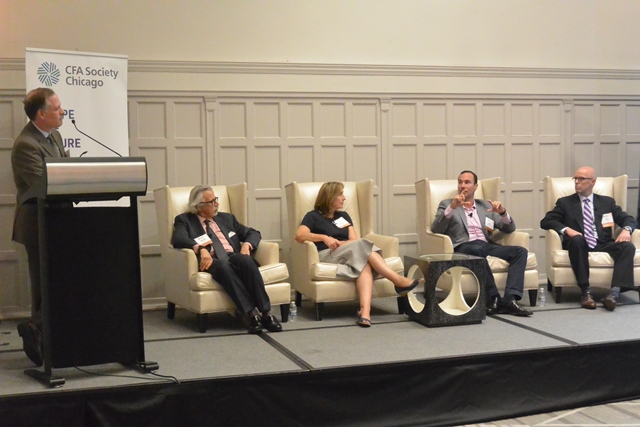 If you compare the list of Fortune 1000 companies from ten years ago to today, over 70% of its members have been replaced due to disruptive market forces and mergers and acquisitions. In the next ten years another large batch of less-innovative firms will likely be erased from the index as groundbreaking technology continue to affect long-running corporations, causing a frenzy of movement for companies to stay relevant against an incredibly competitive global landscape. Innovation isn’t just a buzzword for corporations these days, but a means toward survival.

Dr. James Conley teaches a course at Northwestern on intellectual property and made for a perfect moderator to lead a discussion on investing in innovation. To begin, he used the same video he plays for his students as an introduction to the panel discussion. The five minute video introduced concepts around the value and management of intangibles by corporations. There has been a marked shift in the asset composition of corporate assets from tangible (factories, buildings, equipment) to intangible (patents, ideas, processes, code). Now over 80% of companies’ market value stems from intangible resources. The video explained how patents protect IP owners and the difference between utility patents (20 year life) and design patents (14 year life). It also laid out the rules for what can be patented and why the patent system matters. Copyright protection was also discussed, and this can give authors and creators 100+ years of protection. Trade secrets, such as the recipe for Coca Cola, receive the highest level of protection and can last indefinitely. The benefits of intellectual property regimes include providing incentives to inventors to create and advance collective knowledge. They also help consumers avoid confusion from competing products. Intellectual property has been receiving a lot of attention lately from many sources, not just in the startup and corporate world. Conley said that Christine Lagarde of the IMF mentioned the phrase six times during a recent address to Kellogg students.

Terry Howerton focuses on tech investing and has built a technology community in Chicago called TechNexus. He said that he believes that innovation will drive industry performance and most innovation will come from an entrepreneurial community, not from incumbent corporations. His firm became an accidental incubator for startups as he found himself acting as a conduit between major corporations looking to be linked up with startups in order to drive innovation. 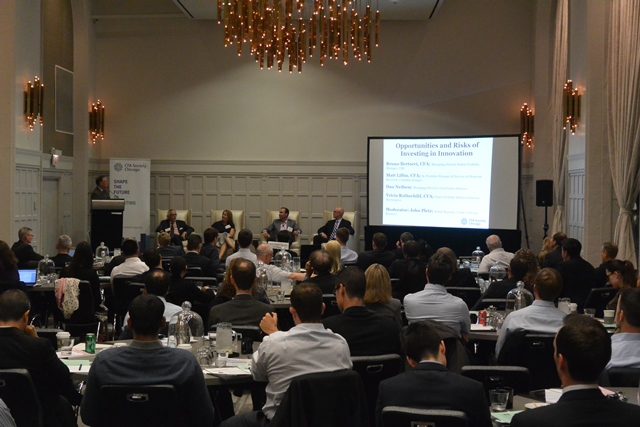 On the financial reporting side, Janine Guillot of the Sustainability Accounting Standards Board (SASB) said her group’s goal is to provide reliable valuation measures to intangible assets, which is often hard to do. She discussed how financial reporting needs to evolve as the percent of a company’s overall market value coming from intangible assets continues to increase. This goal will be accomplished by creating a common accounting language across IP and intangibles that is industry-based. The board has created a set of material, non-financial factors that are grouped into five themes:

The panel noted that corporate ventures are difficult. Not too many Alphabets (parent of Google), with its strong investing capabilities, exist in the corporate world. Time horizons often pose a challenge, as corporate earnings are measured by the quarter while success in the VC world can take many years. The primary goal of a corporate venture also needs to be due to strategic reasons, not to drive short-term returns.

Howerton told a story about an insurance firm that was bragging about undertaking an IT project that would be the biggest of all time, taking over 36 million man hours. Successfully completing the project, with its immense cost, would be seen by many as incredibly risky. Yet that same corporation would view sending four people off to an idea lab to try to come up with innovative solutions as “too risky”. Companies need to recalibrate to the new realities of risk and failure as the pace of the economic landscape moves increasingly rapidly and longstanding businesses find themselves irrelevant in the new economy.