Investing in the New Space Race 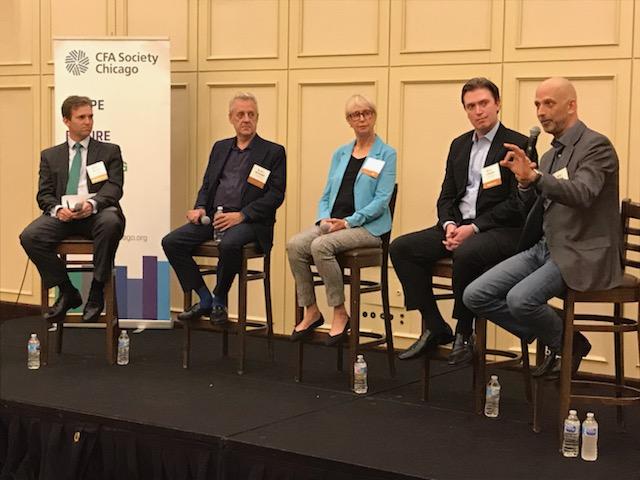 The Educational Advisory group hosted an event on September 12 at the Palmer House Hilton to educate financial professionals, investors, and space enthusiasts on the technologies of space exploration, the geopolitical landscape, and potential winners and losers in the new space race. Attendees learned about how disruptive forces in the space industry will impact other industries and how this translates to investment opportunities.

Moderator, Myles Walton, CFA, managing director and senior analyst at UBS guided the panel discussion utilizing his wealth of experience as an aerospace and defense analyst and work with defense policy and weapons systems. Panelists at the event included:

Myles framed the discussion by asking panelists to comment on what they are most optimistic about space exploration space and what they felt were lessons learned. Johnson-Freese highlighted that seeing investment from the commercial side that came to fruition ten years ago is encouraging. This is balanced with the awareness that space projects take a long time and subsequently have a longer investment horizon. Most technology is dual-use for civil and military and because of this geopolitics come into play. Jorgenson is encouraged by the investing opportunities he sees and that companies in this industry are profitable sooner than expected. He asked us to focus on how these companies impact other industries in the economy. LaPenna honed in on data science commenting that long-term there are many ideas that are yet to be recognized or developed. Investors should not follow the herd and look for diamonds in the rough.

Shifting to lessons learned, Jorgenson spoke of previous business models that were developed by engineers and not by business-savvy managers. Business-savvy managers have come in and the management and execution risk has become better helping to define client demand with a path to revenue. Having a mix of government and commercial investors has been key. Johnson-Freese agreed that business-savvy managers have added value and that the US government recognizing innovation in commercial firms is also a big step. Godwin reflected that the work-life balance of the highly driven and intelligent employees in these firms was not sustainable. LaPenna provided a perspective that some approaches may not be realistic and there is no cookie cutter formula for determining an effective business model. For example, space entrepreneur Elon Musk wants to finance privately but his satellite project is estimated to take 15 years to obtain a mass of 750 million users.

There is significant momentum behind non-governmental stimulation for the space industry. But, is this good or bad? All panelists largely saw this as a positive boost to the space industry. However, with unique opportunities come unique challenges. A key threat is space debris. As satellites are increasingly used, who owns the natural debris found in space and more importantly who is responsible if a satellite is damaged? Godwin pointed out that no one is solving this obvious insurance problem. The insurance industry needs involvement and issues caused by debris need prioritization and resolution. Johnson-Freese added that space law is evolving, and another unique issue is forming laws around how to bring back things from space. In examining challenges, a big question is if global connectivity is demanded by space applications. Steven Jorgensen commented that solving spectrum and bandwidth issues is crucial and optical may provide faster connectivity compared to other technologies. Of options available, optical may also be a cost-effective solution.

What does the future look like for governmental space programs and what should investors expect? Part of the answer lies in American culture. NASA is culture and Americans are proud of the space program but are not as keen on funding it with tax dollars because they do not see it as a priority. Space is taught as a history lesson, but the American public is less interested in the underlying mechanics. It is also cheaper to continue using old technology versus testing new technology. New programs are announced but do not come to fruition due to costs and the inability to gain traction. Programs that do go forward have protracted development cycles opposite of how American culture focuses on quick turnaround. This causes political and technical risk. The original space race originated from political tension. Panelists pointed out that if China lands a man on the moon, the US could have increased enthusiasm for space programs.

A theme throughout the program was the role of private investors versus the government for the previously mentioned dual use technology typically used by the defense sector and how this will play out in the future. LaPenna thinks private investment is vital and reminded us that if you look back in the airline industry, many airlines were spurred by private investments from millionaires. He believes if you don’t dream big, you don’t get returns. Richard Godwin believes that it all comes down to survival and that one needs to understand the market from a technical and customer perspective. Godwin also suggested that investors should consider that many of the firms will not likely get to an initial public offering (IPO) stage and will be acquired by the government. Johnson-Freese shared an observation about barriers for commercial firms investing in space. A significant roadblock that hinders commercial firms is working through government requirements such as contracts, security clearances and paperwork. This has impacted product development adversely. On the other hand, venture capitalist firms have been able to make inroads and now have calls with the US Air Force to learn firsthand about requirements. The Air Force in turn can fund projects quickly and is working closely with private industry.

As investors, what should we take away about space investing?

The space industry has an exciting and uncharted future. Buckle up and get ready for a zero-gravity experience.