Investment Impacts of the Pandemic 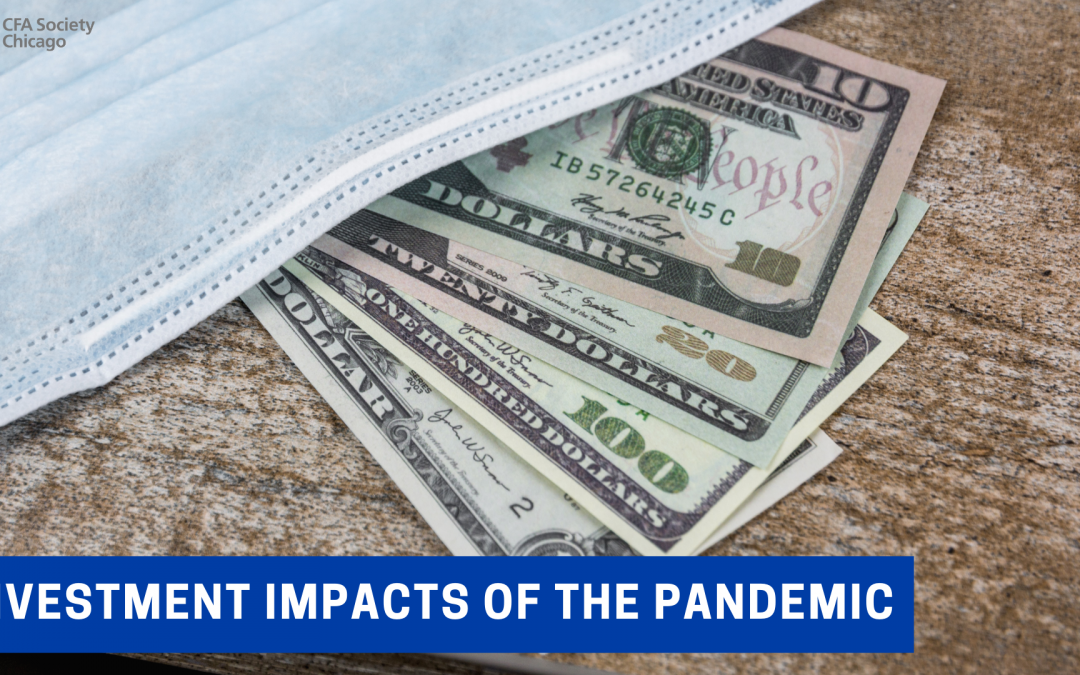 Following round robin introductions from the panelists, Wyatt kicked off the discussion by asking each panelist to share what has been the most dramatic shift or shock to their asset class as a result of Covid?

Winters began by highlighting the steep sell off of risk assets and collective move into lockdown coincident with an abrupt contraction in the availability of credit in the public bond market and impairment in secondary trading. This created distress for corporate borrowers and a pervasive fear that we were going to see default rates in excess 10%. The Fed came in as a lender of last resort, easing tensions, and while defaults increased, they ultimately peaked at ~6% about half of what was expected. Post the Fed’s intervention new issuance took off and by the end of the year liquidity was arguably the strongest ever for non-financial corporate bonds. The Pandemic was also an accelerator of two other trends already underway: 1) companies embracing of technology from both a digital transformation and data analytics perspective; and 2) the convergence of ESG investing into investing more broadly.

Halper echoed the sentiment Winters expressed about the initial shock being the speed and magnitude of the correction and recovery which was record breaking. She felt the shock for the rest of the year was the strength of the equity markets with large cap stocks returning 38%. What’s changed though is the leadership of stocks coming out of the fourth quarter 2020 with the markets experiencing a more hopeful trade following the vaccine news. Large caps were up 1% in the first quarter while small cap value stocks were up 21% in the hopes of a strong economic recovery, especially in the U.S.

Walny agreed with Winters and Halper about the speed with which markets reacted but was blown away by the muscle memory of the Federal Reserve. In a March 23rd announcement, the Fed brought out the kitchen sink encompassing many tools from the past but also included new items:

All of these contributed to a significant improvement in market liquidity. This assistance drove rates even lower, with many implications regarding asset allocation and especially fiscal policy.

Beard then drew on the themes discussed by the other panelists, agreeing it was a surprise that stress failed to reach the levels expected–particularly for the number of large, distressed funds that had recently raised billions of dollars only to find few investment opportunities. A second trend, which blew up private credit over the last year is the proliferation of rescue financing for small and middle market companies that didn’t benefit as much from the Fed’s actions. This has created an interesting investment opportunity for seasoned teams who know how to structure complex deals and provide rescue finance capital. Another development given the low-rate environment has been funds flowing into private credit seeking higher risk-adjusted returns. As a result, there’s a growing asset class aimed at disintermediating the public high yield market. Large credit shops are raising multi-billion-dollar funds targeting the high-end of corporate private credit and promising the ability to provide quick, easy, executable solutions for skittish investors.

Wyatt acknowledged the dramatic shifts brought about by the pandemic and noted that the short-term solutions created by the Fed were a band aid. She next asked the panelists to weigh in on what they thought the long-term implications and associated risks and opportunities were for each of their sectors.

Winters circled back to Beard’s comment regarding high yield being disintermediated. She said she’s been seeing companies come to market that were previously only in the bank loan market So, now we’re seeing new issuance from $100 million EBITDA companies, lower than what we’ve seen in a while. In terms of other risks, companies have record liquidity on their balance sheets, so the question is: what will they do with it as things normalize? Upgrades are exceeding downgrades by a large margin, so as companies become more comfortable will they focus on re-leveraging, reinvest in the business, or use the money for M&A or shareholder remuneration? We need to be mindful of this. Further, rates are very low and some think that will continue, but it’s important to consider rates going up and how the Fed might respond given they’re in a box. If inflation isn’t transitory, we need to keep these things in mind when allocating assets.

Given Walny’s work on inflation, Wyatt asked her to share her views in this regard. She noted that we’re coming from a place of lower prices in airfares, hotels, rent, etc., over the last year so just normalizing will be a shock, but is it sustainable? Long-term inflation expectations have been ~2.4%. The question is, what will it take to get inflation above that? This would require a regime change which she’s not convinced will happen, but does think there will be inflationary issues, referring to Winter’s point about debt.

Wyatt then asked Halper to share her thoughts about changes in asset allocation and investment strategy and how the decision-making process may have changed in this virtual world. Halper noted that Wespath has a long-term perspective, so nothing’s changed regarding asset allocation overall, but what has changed is the conversation within asset classes such as what’s the mix in equities and do we have the right allocation to alternatives? Where can we get the return we need? They’ve focused on overweights to international and emerging which hasn’t worked the last thirteen years but they feel the time is right. Within fixed income they’re 100% active and talking to their managers about where they can pivot and garner more return, so for instance they added affordable housing which has been positive.

While on the active fixed income topic, Wyatt asked Walny if she’s seeing more interest in fixed income and how they’re shaping strategy. Given low yields, clients are seeking both higher premiums and diversification of premiums. She said clients are moving to private and the securitized market to gain a complexity premium. In addition, they are seeking high yield and emerging market opportunities. AllianceBernstein is predominantly an active management shop which is mainly showing up in ESG and sustainability currently.

Wyatt pivoted the discussion to technology and how effects how we live, work and communicate with clients. She turned to Walny to discuss how AllianceBernstein is using technology differently. Walny said the pandemic fast forwarded whatever was happening and technology was at the forefront of that, including trading and interactions with clients as well as team members. They digitized information like research and guidelines and invested in trading capabilities which gave them the ability to s search message boards and exchange platforms to get the best price available. This allowed them to react quickly to large flows (in or out) which has paid off well, noting that technology improvement in back-office capabilities is changing the industry.

The conversation was then directed to Beard and how consultants are approaching client communications, investment research and manger underwriting in the remote, technology driven environment. She noted that private credit is a relatively young asset class with a lot of new entrants and conducting due diligence on a manager is more of an art than science. Given there aren’t well developed sources of data for evaluating managers, getting in front of them and using that sixth sense was important pre-pandemic. Evolving to virtual meetings with mangers during lock down has been challenging so they’ve been less comfortable recommending a new manager. Callan has tended to stick with their tried-and-true long-term managers and not jumped on newer, sexier things like securitized music royalties.

Wyatt asked Beard if she would elaborate on public versus private allocations in constructing portfolios. Beard said there’s been a big move among clients to increase private market allocations. Private equity is more popular as it’s better known but private credit is growing. One of the challenges is talking to Boards and CIO’s to determine where private credit fits within the portfolio. There’s rarely an approved private credit bucket. They’ve seen clients allocate to private credit with the sources of funds being public equity as well as public fixed income. Another trend is large public fixed income shops moving into the private side which raises the question – are you just turning your high yield team into direct lenders?

With Halper having been both a manager and now an allocator, Wyatt asked her to share insights on managing investments across the liquidity spectrum. She views the public market as well defined but in the private space due diligence is tougher than everything is in fast forward particularly in ESG and Impact investing given the social changes of 2020. Wespath has seen a number of impact-focused opportunities in different markets around the globe and asset classes but with very limited track records, so they’ve shied away. Given Wespath’s known leadership in ESG investing, Wyatt wondered how they’ve been working with ESG managers to understand they’re not just window dressing. Halper indicated that engagement is the key in terms of shareholders, proxy voting, and asset manager review. Instead of long generic questionnaire’s, they’re now shorter with more pointed questions taken in conjunction with direct and targeted conversations on whether the parties are aligned toward the same end goal. 2020 was a year for increased engagement and more robust dialogues, enabled by technology, allowed for increased frequency and cadence without travel. Of note is the accelerated focus on climate which increased threefold from 2019 to 2020.

The final question was directed at Winters given Northern Trust’s leadership in ESG and diversity. Wyatt wanted to know what clients are asking of them as a manager and how Northern is responding. Winters shared they’ve integrated ESG into both research and investing through a proprietary scoring system, while looking for ways to more actively engage with issuers and collaborating with their equity counterparts. While clients are focusing on this more than ever, she finds it exciting to see issuers embrace the importance of this to investors. A recent high yield issuer included a forty-page PDF in their presentation talking about their goals across EGS which wouldn’t have been the case a year ago.

The discussion concluded with a question from the audience regarding work/life balance given the remote environment and managing staff from afar. Winters believes trust is a really important component which begins with good communication. Going forward Northern Trust is looking across the organization to embrace a hybrid model tailored to individual areas. It will come down to personal preferences but also departmental needs and individual roles. While we’re all experiencing zoom fatigue, she believes the use of video has allowed for more inclusivity of colleagues around the globe.

Knowing Beard’s situation with children and a dog at home, Wyatt asked how she’s juggling everything while also meeting expectations at the office. Beard said it was trying as her job became a 24/7 experience combined with four children learning from home at a time when the markets were crazy; balance was not an option early on. Client needs were heightened and demanded attention. The first six months were overwhelming, and she felt like everything was suffering which led to a conversation with her boss and ultimately allowed for some boundaries around work and family time. While balance is still a work in progress, she feels going forward a determined hybrid model is desirable. Beard acknowledged that at some point we all felt ‘I can’t do this anymore’, but as women we pull it together and our passion for what we do wins out and we make it work!

The event concluded with virtual networking in breakout rooms which was well received.