Mental Skills: Get Your Head in the Game 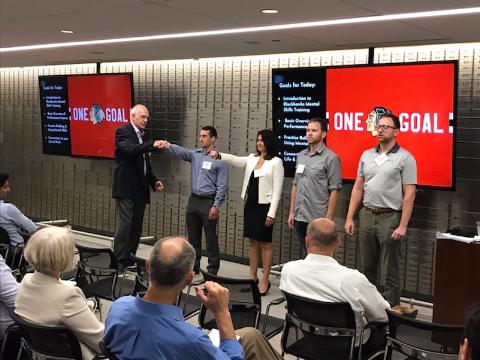 How to control and increase one’s mental skills was the topic that drew a capacity crowd for the latest installment of CFA Society Chicago’s Vault Series on August 20. The featured speaker was Jim Gary, a Licensed Clinical Professional Counselor with 52 years’ experience in the mental health field. In 1999, Gary started a program to help high school athletes adapt behavioral techniques to enhance their confidence and performance. One of his students was Tom Kulentes, who found the program so rewarding it led him to a career as a high school psychology teacher and, eventually principal. He also joined Gary as a partner in his counselling business. Gary’s success with student athletes received wide media attention, to the point that the Chicago Blackhawks commissioned him to work with their players and staff. He was the first mental health therapist on the staff of an NHL team, so he developed the completely new role on his own. Gary had the honor of working with the teams that won three Stanley Cup Championships (earning him a ring for each one).

Gray began his presentation with a demonstration of a simple visualization exercise. He had the audience stand up and twist their upper bodies as far to the side as they could without moving below the waist. Then he asked them to close their eyes; draw, hold and release a deep breath; and visualize repeating the exercise while trying to turn further. Then they repeated the movement with closed eyes. Most in the room were able to turn further than they had the first time. The effectiveness of the example was evident to everyone. Gray called visualization–when the mind directs the action of the body, a simple and effective tool that everyone can use to increase their effectiveness and performance in many ways (but that few do). When we train our minds to send a positive message to the body, we will get a positive result, although Gary also demonstrated that negative messages create a correspondingly opposite effect. Visualization has even been shown to be effective in medicine. With the right coaching and a strong signal, the body can respond in a way that helps a patient recover.

Gary next introduced his partner, Tom Kulentes. Now a high school principal, Kulentes experienced such a positive impact from Gary’s counselling when he was a high school wrestler that he has applied it in his professional and personal life ever since, eventually joining him as a business partner. Kulentes approaches his role as a school administrator by assuming his students begin with an unknown, but unlimited capability–or talent–to learn and improve themselves. Such talent can’t be measured, but it can be increased with improved mental skills. These skills can be taught and enhanced with mental exercises and are one of the best predictors of performance.

Gary and Kulentes used their work with the Chicago Blackhawks hockey team to illustrate the application of mental skills counselling. Like all teams in the National Hockey League, the Blackhawks operate at the highest level of competition in their field. They employ the best athletes, selected from around the world, guided by top coaches, trainers, and counsellors focusing on attaining peak performance of both body and mind through deliberate, intense training and practice. The level of competition creates intense pressure on all participants but especially the players. They need to perform at peak levels consistently while managing the pressure of travel, risk of injury, intense media coverage, contract negotiations, and fan expectations, not to mention family obligations.

Kulentes likened the competitive, pressure-packed environment of the professional hockey player to that of investment managers. The environment creates stress which he defined as the body’s internal response to external pressure. He diagrammed stress graphically under a bell curve. A state of stress occupied the center, tallest part of the curve where the subject should feel energized and focused, where performance peaks because work seems to be easy. By contrast, in the left tail, the subject might feel bored or detached from performance which can improve as he moves to the right on the stress spectrum and up the curve. Past the sweet point in the middle of the curve, stress increases greatly and becomes distress characterized by increasing fatigue, burn-out, poor health, and culminating in a breakdown. Successful performance requires knowing oneself well enough to stay in the mid-range of the spectrum and at the peak level under the curve. Kulentes emphasized this by quoting a proverb: “Mastering others is strength, but mastering ourselves is power.”

The attribute that most sets growth mind set people apart is “grit” which Kulentes defined as:

People exhibiting this sort of grit will enjoy greater success than they otherwise would. Kulentes described success as the visible part of an iceberg, lying above the surface. It’s small compared to what’s below the surface which represents the important features on which success depends such as dedication, hard work, and diligence.

Gary returned to the lectern to complete the presentation by introducing one more concept: that of the Self Talk. This he described as a brief statement affirming one’s commitment to taking control of how the mind controls the body. As examples he provided: