An intrepid group of approximately 50 seafaring CFA Chicago members and guests boarded the Tall Ship Windy at Navy Pier for a memorable evening architectural tour of the Chicago skyline and networking voyage on July, 22, 2014. The event was hosted by the Social Advisory Group. 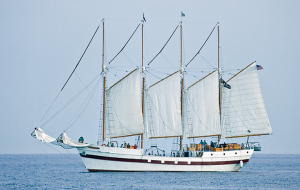 The Windy is the only 148-foot traditional four-masted gaff topsail “pirate” ship in Chicago. Before departing, our pirate guide “Trooper” informed all passengers of the safety precautions and enforcement policy …“No smoking or you will be thrown overboard!” And then, he competently guided the tour, which lasted just over one hour, from Navy Pier to the Adler Planetarium (and back) while providing an entertaining history of Chicago and its architecture including both legend and lore.

Trooper began by asking the passengers about the cause of the Great Chicago Fire that lasted from October 8, 1871 to October 10, 1871. Although Mrs. O’Leary’s cow came to mind for most, even before cocktails, Trooper explained that the reporter who wrote the O’Leary account later admitted he made it up as colorful copy and the City of Chicago exonerated Ms. O’Leary in 1997. Half way through the voyage the crew suddenly shouted “Prepare to Jibe! Prepare to Jibe!” and relayed that message all the way from the ship’s stern to its bow. Hearing this command, several CFA Charterholders instinctively thought it was time to bust out their best dance moves but soon realized they were just preparing to turn the boat (Oh, they said jibe – not jive). The jibe, opposite of the tack, is a turning maneuver in which the stern of the boat passes through the wind rather than the bow. 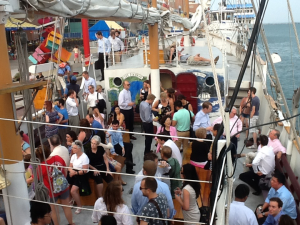 Trooper went on to explain that Chicago is called the “Second City” because it was rebuilt on the embers of the first city after the Chicago Fire by architects and designers like Louis Sullivan (“the father of skyscrapers”) and Daniel Burnham (City Planner and Director of Works for the World’s Columbian Exposition in Chicago 1893). He artfully told a number of stories about a variety of buildings including the 311 South Wacker Building (the crown was redesigned to be a replica of the wedding ring given to the architect’s fiancé), Willis Tower (elevators traveling 1,600 feet per minute are among the fastest in the world), John Hancock Center (its trapezoidal structure and legend inspiring Harold Ramis’s diabolical building in “Ghostbusters”) and Lake Pointe Tower (standing alone east of Lake Shore Drive) to mention a few. Overall, the voyage was smoother than a metra train commute and provided a fun and educational networking experience.