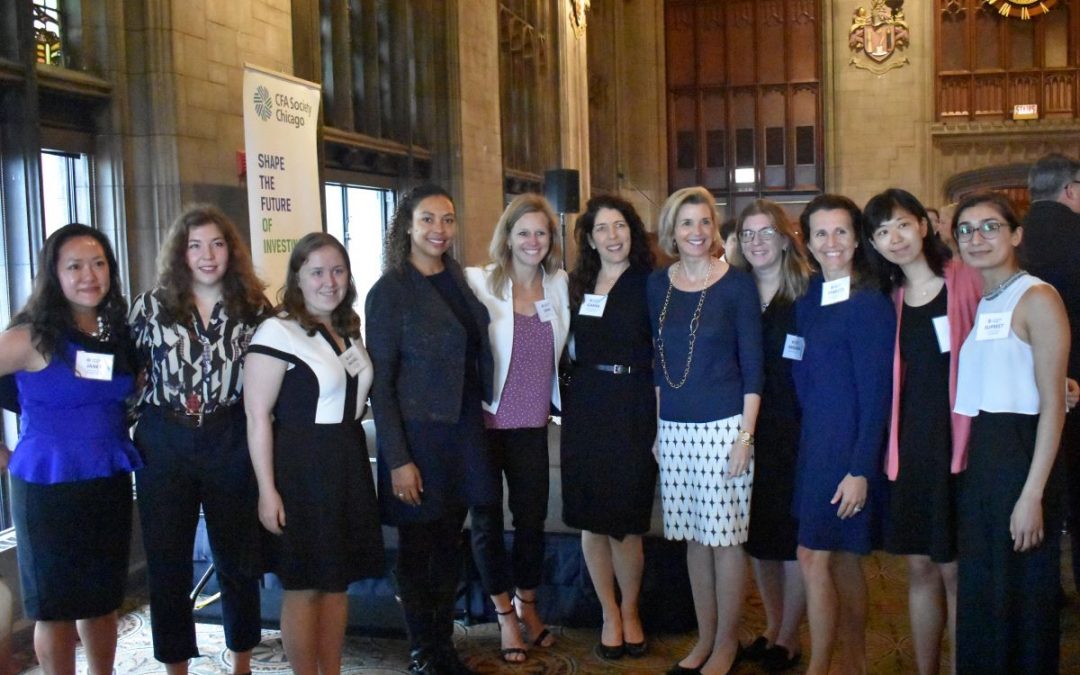 On September 17, 2019, a sold out crowd gathered at the University Club to hear Sallie Krawcheck speak about her experiences in the investment industry, how the industry landscape is changing, and her journey with Ellevest—a digital investing platform that she founded. It was an invigorating address in which Krawcheck tore up the script and gave an honest perspective on the investment industry and women’s current—and future—roles within it. Before diving into her journey with Ellevest she explained it’s origin.

Prior to founding Ellevest, Krawcheck had an illustrious career on Wall Street working for names such as Smith Barney, Citi, and Merrill Lynch. She was an accomplished research analyst at Sanford C. Bernstein & Co and quickly rose to be CEO. After continued success, she was offered the CEO position at Smith Barney and then the CFO position at Citi. She then transitioned to be the CEO of Citi Wealth Management followed by CEO of Merrill Lynch Wealth Management. After building such a stellar reputation she had some people approach her asking if she would ever develop an investment platform for women, “because I was a woman, and I worked in investments!” She admit that at first she shunned the idea thinking it was “junior varsity” while she was already excelling in the big leagues. However, a few experiences began to shift her perspective. Notably, her departure from Merrill Lynch wealth management made her think about the role of women in finance. Her experiences coupled with the habits of a researcher led her to more seriously investigate the idea.

Krawcheck informed the crowd that women hold 71 cents of every dollar in cash and only 2% of US households have women that lead investment decisions. She attributed these statistics to women’s general emotional block when it comes to money. She even shared some personal experiences from her own childhood that she believed made her more risk averse—or rather, risk aware. Krawcheck conjectured that these types of experiences are pervasive in American women’s childhoods. She further conjectured that the way women are brought up in America leads to modern money media not resonating with women because it is more male-centric. Thus, the messages from money media that supposedly geared toward women “are wrong.” The icing on the cake—women outlive men on average, often by several years. This means that many women are left to fend for themselves in the waning years of retirement. Armed with this information, Ms. Krawcheck came to the conclusion that “the retirement savings crisis is a women’s crisis.”

After resolving that she would start an investing platform for women—a resolution that came to her in a moment of intense inspiration while putting on mascara—Sallie got busy doing what was necessary to build a world-class organization. She started by gathering a world-class team of people with experiences spanning from finance, tech, marketing, and operations—most of whom were women who identified with Sallie’s mission. That has persisted through the growth of the company as well. In fact, two-thirds of Ellevest’s employees are women. However, Sallie was not ashamed to reveal that there is also a mix of men on her team.

After her team was assembled they began looking for investors. Many of Ellevest’s early investors came from Chicago—Morningstar, Penny Pritzker, and Mellody Hobson were among those named. Once they had obtained funding and put together a beta product they embarked on research, largely through social media. Sallie and her team started with outreach to gauge interest in their product. What they initially found was startling but what they observed over time was exhilarating. At first women had one of two reactions to the idea of Ellevest: about 60% said “I’m interested” while the remainder said, “no thanks, why would I invest my money with Junior Varsity platform?” The latter was admittedly similar to Sallie’s initial reaction to an investing platform built for women. However, over time they saw a shift in sentiment.

As the women that responded with “no thanks” began to research Ellevest they became intrigued. They began to see that Ellevest wasn’t just some Junior Varsity platform. Instead, they began to see a well-constructed tool that resonated with them. Sallie and her team were diligent with their social media and their support base continued to grow through these efforts. Today Ellevest has the largest social media following of any financial firm.

Krawcheck closed her keynote saying that even while Ellevest continues to grow, she keeps an eye toward the future of women in finance. While she naturally hopes that Ellevest continues to find success and grows into a durable and profitable organization, she is also mission-driven and hopes that she is able to “create a world where fewer women are afraid of finance.” Krawcheck does this herself by acting as Chair to both Pax Ellevate Management and Ellevate Network—two organizations that are advocates for women in finance. Beyond her own endeavors and venture she simply hopes that more organizations find value by investing in women, even though that may lead to fiercer competition for Ellevest.

The keynote was then followed by Q&A:

What kind of outreach efforts does Ellevest employ?
None, really. Ellevest is a startup after all and so it is focused on survival. Due to the high entry costs of succeeding in the financial services sector Krawcheck and her team must prioritize their goals aggressively.

What, in your opinion, is the biggest and most positive change for women in finance?
That women are finally fighting for themselves. More specifically, that they are starting their own companies! Seeing people—men and women alike—join in to Ellevest’s vision of connecting with women has also been great, despite the competition it brings Ellevest.

What other organization help women with financial literacy?
Books of the academic persuasion have been the source for years. But they are dense and few people really take the time to understand them. Ellevest has been using social media to “chop-up” the education into more digestible bits of information. Another organization unaffiliated with Ellevest is Girls Who Invest, which targets female college students for asset management jobs and internships. The also provide a continuous community for women in asset management to access for guidance and growth.

How do we change the perception about women in the finance industry?
It is a message that has to first be communicated from childhood and money media needs to do a better job of connecting with women.

What is your 5-10 year vision for Ellevest?
To build a successful business, naturally. But to also change the way women talk about money and accelerate the national conversation about women in finance.

What is the fix for the fear resulting from the #MeToo movement?
First, people in the industry need to know that there has only been one case of a wealth management executive being fired for sexual harassment—and he was found to be guilty of the harassment in a court of law. But women can create a shift in this fear by starting their own businesses and bringing in fellow women.

What has been your secret to success?
Don’t be afraid to take risks. Krawcheck shared that the best advice she ever got when she was an equity research analyst was that she should make “big calls on big stocks.” This led to her making some controversial calls but they played well and she ended up making the right call.

What kind of men do you work with at Ellevest?
Feminists. But they are not feminist in the radical sense, they are feminist in the sense that they share Ellevest’s mission to create equality in investing.