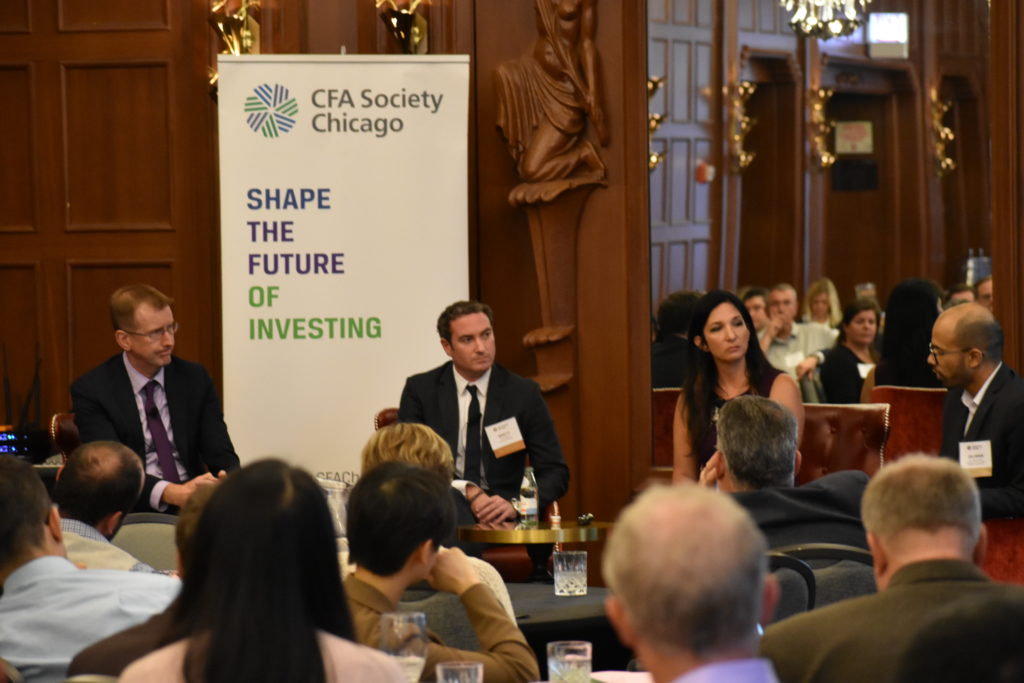 A review of the Quantitative Easing (QE) programs conducted by central banks around the world since the financial crisis of 2008-09 was the topic of a panel discussion before a full house at the Hotel Allegro on September 13th. Dr. Dejanir Silva, professor of Business at the Gies School of Business at the University of Illinois served as moderator. Dr. Dejanir focuses his research on unconventional monetary policy, financial regulation, and entrepreneurial risk-taking. His panelists included:

Dr. Dejanir kicked-off the event with preliminary comments starting with a quote from the former President of the Federal Reserve Board, Ben Bernanke:

“The problem with quantitative easing is it works in practice, but it doesn’t work in theory.”

More specifically, Dr. Dejanir explained that although empirical tests have shown positive effects of QE, we don’t have a clear understanding of the channel by which it works: the how and why of QE. This condition makes QE programs difficult to plan, execute, and, most importantly, evaluate after the fact.

The panelists then gave their general observations on QE as conducted by the Federal Reserve (Fed), European Central Bank (ECB), and the Bank of Japan (BOJ). Prins pointed out the huge size of the programs—the equivalent of $22 trillion. Even though the Fed has begun (slowly) to unwind its QE program, the ECB and BOJ are still accumulating securities. Prins called this an “artificial subsidy” which has encouraged investors of all types to take more risk than they otherwise would (or should) have. Perversely, this could end up having a destabilizing impact.

Ryan complimented the central banks for conducting QE claiming it helped avoid a long, global depression, and he added, they had learned a lot about how to use the tool in the future. He admitted surprise that the term premium in financial markets hadn’t returned to pre-crisis levels, and wondered what this might imply for the performance of risk assets in the future.

Perli, pointed out that, because the QE programs at the ECB and BOJ are still underway, conducting a postmortem is premature. Indeed, the ensuing discussion failed to reach many insightful conclusions about QE.

Dr. Dejanir then asked the panelists if central banks should conduct QE at all, in light of the risks it poses for them (by investing in asset classes beyond sovereign debt) and for investors (by reaching out on the risk spectrum further than usual). Ryan thought the risks were lower for the U.S. than for other countries because the dollar is the world’s reserve currency. That effectively removes a limit on QE for the Fed. He added that the increases in required bank capital enacted during the crisis counteracted the QE programs by requiring banks to operate at lower leverage ratios. This has led to the idea of flexible capital regulations allowing for their application counter-cyclically. The Fed is conducting research into this concept.

Perli, said that in a time of extreme crisis, central banks must take actions that go beyond standard policy, and the recent experience fits the bill. However, he questioned the separate nature of the various QE programs, and suggested a coordinated effort could be more effective in the future.

Prins, acknowledged the inherent riskiness of QE. She contended that a lot of the liquidity has found its way into equity markets, either from end investors, or corporate buybacks. She feared that future rounds might require further investments into equity markets by the central banks to be effective. She also noted that the lack of a clear exit strategy added to the uncertainty, if not the outright risk, of QE programs.

The next question put to the panelists was whether or not the central banks should (or would) seek to reduce their balance sheets to pre-crisis levels. All three were skeptical that they would. With specific regard to U.S. MBS, Ryan doubted the Fed could reduce its holdings significantly without a material impact on the market, which it would be reluctant to do. Banks invest heavily in agency MBS because of their low-risk weighting in determining capital requirements. Prins pointed out the Fed would be careful not to upset the MBS market and generate a knock-on negative impact on bank capital. Perli expected all central banks to continue with greatly expanded balance sheets for the foreseeable future. He also expects a slow transition to transactions-based policy rates rather than administered ones. Ryan seconded this opinion and endorsed SOFR (Secured Overnight Financing Rate)–essentially the overnight treasury repo rate–as an alternative to Fed Funds.

The discussion moved on to the topic of the increase in indebtedness since the crisis. Prins presented figures highlighting recent changes. Total household debt has barely budged since 2007, rising just $100 billion to $9.4 trillion. However, this masks a shift of over $1 trillion from mortgage debt to other types of consumer debt. Non-financial corporate debt has nearly doubled to $3 trillion (Ryan noted that ratios of corporate indebtedness have reached levels usually characteristic of recessions). Student loans have risen dramatically, in relative terms, from $500 billion to $1.4 trillion. When sovereigns are included, total global debt has risen from about $97 trillion to $247 trillion, mainly because debt remains very cheap for borrowers almost everywhere in the world. All panelists acknowledged, however, that emerging market countries, having to borrow in developed markets, will struggle to service their debt denominated in foreign currencies.

The debt question eventually led into the final topic of the event: inequality. Ryan noted that inequality has been rising since 1980 but has only become an issue more recently. Dr. Dejanir asked if central banks should take inequality into consideration in conducting QE in the future.  Ryan responded that central banks lacked tools to address the issue. Perli agreed, saying that in times of crisis, central banks had to act to help economies quickly, without consideration of side issues like inequality. In any case, inequality is a macro policy issue, not a monetary policy one. Prins thought inequality should be addressed with regulations all the time, not just during crises.

In the end the panel had no concrete conclusions on QE, but agreed on some broader points: