Smart Beta: Smoke and Mirrors or the Next Generation of Investing? 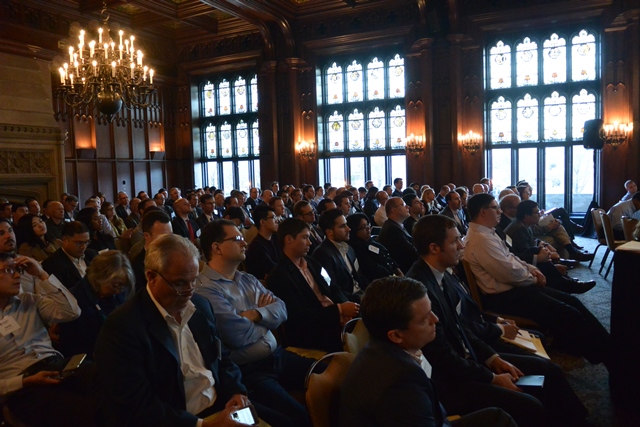 Smart Beta – is it a bad fad or here to stay?

On February 23, two panels set out to discuss that question at the University Club.

Ben said that the strategies of smart beta don’t necessarily feel smart over the full cycle. Right now there are 539 Exchange Traded Products (ETPs) doing smart beta, with $424 billion in assets and ETPs represent just one wrapper of the strategy. 21% of all ETPs are in the US, and 20% of all total new asset flows are going into smart beta products. The size of smart beta means that it’s too big of a market to ignore. Similarly, in the increasingly crowded ETP space, over a quarter of new launches involves smart beta funds. “This has been an organic growth story,” Ben said. Ben introduced the first panel and asked them to level set the conversation by defining what smart beta means to them.

Craig Lazzara of S&P Dow Jones said he prefers the term “Factor Indices” over smart beta. He quoted Voltaire and said that the saying “The Holy Roman Empire is neither Holy, nor Roman, nor an Empire” applies to smart beta. He encouraged the audience to read William Sharpe’s The Arithmetic of Active Management, which concluded that the average active manager’s return will be less than the average passively managed dollar, a conclusion that helps support the smart beta premise. Craig’s definition of smart beta is simple: Indices that try to deliver returns (or a pattern of returns such as low beta, high volatility, etc) of a factor, not of a benchmark.

Craig went on to say that smart beta factor indices allow a user to “indicize” returns of an active management strategy. “Twenty or thirty years ago, you’d have to pay an active manager to get these kinds of returns,” Craig said. And now with smart beta products, you don’t.

Eugene Podkaminer of Callan Associates began his remarks by saying that he was skeptical about smart beta and thinks that the name smart beta is “stupid”. He said that there is a lot of confusion around smart beta, how strategies are packaged and sold and what is under the hood. Smart beta has been driven largely by retail investors, who are susceptible to return-chasing behavior and clever marketing, while institutional investors with longer time horizons haven’t been as involved. “When you open the hood of a smart beta investment, it’s a different story,” said Eugene, who said he is interested in smart beta from a risk factor allocation perspective.

One important question that needs to be asked of smart beta, according to Eugene is “are you confident that the returns from these factors will continue?”

Trey Heiskell of Blackrock said that smart beta is both old and new. Like Eugene, he also hates the term smart beta and prefers ‘factor-based investing’, which he believes to be a more accurate name. “There is a shift from alpha to smart beta happening right now,” Trey said. And much of its growth is due to the context of the market we are in, with retail investors dissatisfied with the recent underperformance of active managers and growing adoption of ETFs. These are some of the main factors driving the growth in smart beta.

Craig agreed with Trey about smart beta being both old and new, saying that “these strategies have been around for years, packaged differently”.

Once, Craig was asked “What is it that ETFs allow large institutional investors to do that they can’t already do?” 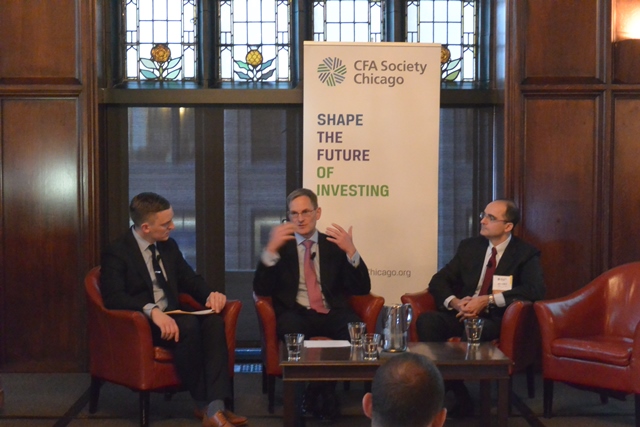 “Absolutely nothing,” he answered. But as a retail investor, now you can get the benefits of factor exposure you want cheaply and easily without dealing with an active manager.

Eugene gave an update on how Callan’s process has evolved and said that now they are very risk and diversification-focused, and when evaluating a potential investment, more interested in its covariance with other investments than its forecasted returns. You need to have a robust set of tools to determine what your factor exposures are, such as a risk model. Some advantages of smart beta ETFs are that they are liquid, transparent and cheap. He said that the question “Why am I paying so much for hedge funds,” will continue as risk factor-based investing grows in popularity. “Indexing and smart beta have chipped away at what we call alpha,” Eugene said.

Eugene stated that smart beta does have some problems. Just because the portfolio appears to perform well in the past, the returns won’t necessarily continue. “Backtests by definition look good,” Eugene said. Smart beta needs to be forward looking, it has to be ex-ante, he said. Investors are trying to build portfolios that work well in the future, and you need to forward-looking economic rationale for any investment you make, which also must apply to smart beta products. Smart beta puts the onus of complex portfolio management tasks on the individual, who now must answer “Why did I make that tilt” instead of asking that same question to a manager.

Trey responded that while an economic rationale is important, it is dangerous to be hyper-focused on short term performance of smart beta.

Craig noted that it is important to watch out for spurious correlation, giving an example of extensive data mining leading to a researcher to conclude that butter production in Bangladesh is a strong leading indicator of the S&P 500.

Trey said that just because it is smart beta, it doesn’t mean you’re excluded from doing your own due diligence.

Eugene posed a philosophical question and asked “Can all market participants do the same thing at the same time? And can everyone be in smart beta at the same time?” This isn’t possible. There has to be someone on the other end. We can’t all be in low volatility products. Why ought to these risk factors continue to deliver these kinds of returns? And how many factors truly exist? At Callan, they don’t believe that there are hundreds of investible factors, they look at about 10. 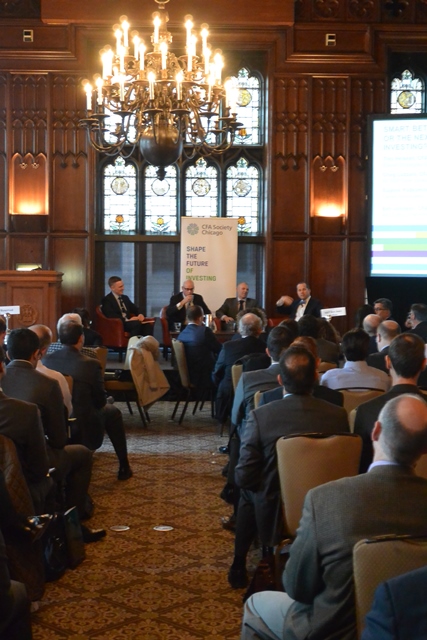 Eugene said that smart beta is interesting like a bicycle is interesting, while risk factor investing is more like a race car. “Everyone hates fixed income benchmarks,” Eugene said, saying that that may lend itself well to a smart beta product.

Michael Hunstad said that Northern Trust has been doing factor based investing for 20 years and smart beta is definitely not new. “The hard part with smart beta is making a lot of decisions that were formerly made by your portfolio manager”, Michael said. Some of these decisions are “what factors do I choose?” There are many smart beta providers also, and there are some big considerations involved that clients need help and guidance with.

“Where does smart beta go in my portfolio,” is a very good question. It’s not exactly active, yet not totally passive either. The old way of deciding a manager allocation was by making a list, and allocating to the manager who performed best. This doesn’t work with smart beta, and the selection of products is tough. According to Michael, smart beta is two things:

1) A source of excess return
2) A risk paradigm

Mehmet Beyraktar counted himself among the many in the panel who dislikes the term smart beta, and said investors need to question how the products complement their existing portfolios, and the challenge of smart beta is how to integrate. He said that a big part of the investment process is obtaining the right tools to get transparency into smart beta investments and a means of calculating exposure to risk factors, such as a factor-based risk model. Not that much research is available into how risk factors and smart beta will perform is available just yet, he said.

Ben offered an exchange he heard between a Middle East-based client and an advisor, where the advisor asked how long the client’s time horizon was, and he responded “We measure in generations.” The client then asked “How often do you look at performance?” and the client said “quarterly”, a huge mismatch between the evaluation period and the investment horizon.

Michael told a story about an investor who thought he could use PMI to make a tactical call on the market. There certainly are leading indicators, but the hard part is determining when they will play out. He said that he doesn’t have much confidence in anyone’s ability to time cycles and market behavior. But multifactor products are the wave of the future in dealing with cyclicality. With smart beta, there is a concentration risk on one end of the allocation spectrum and a dilution risk on the other end. If you simply allocate equally among all the risk factors, you probably will end up with an investment that looks very similar to a cap-weighted benchmark. 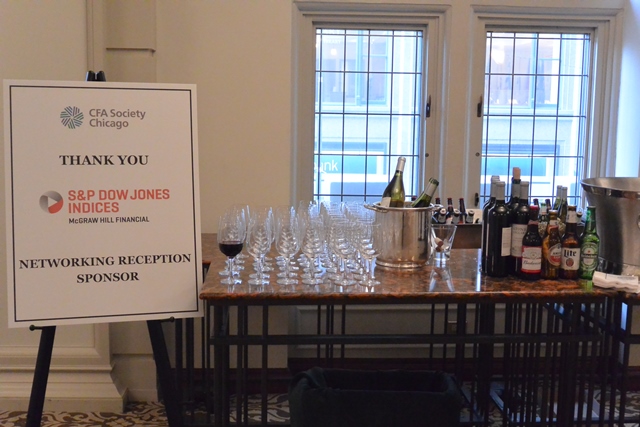