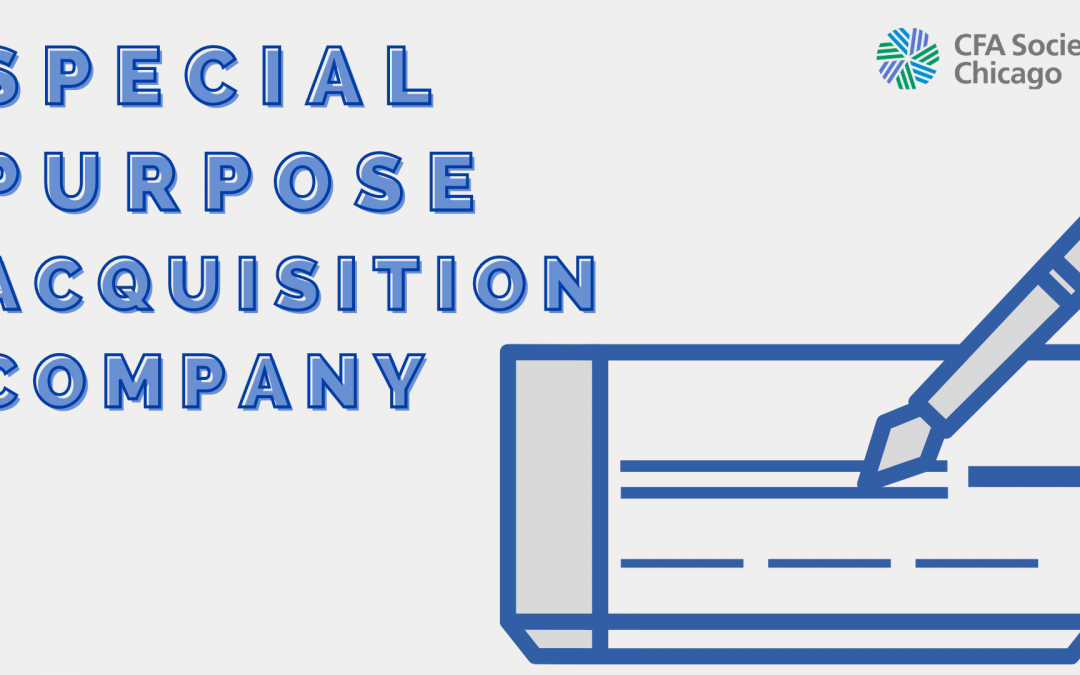 On December 15, 2020, CFA Society Chicago’s Education Advisory Group hosted a Zoom event exploring SPAC investing. What is SPAC investing? Investopedia provides a nice summation; A SPAC (Special Purpose Acquisition Company) is a company with no commercial operations that is formed strictly to raise capital through an initial public offering (IPO) for the purpose of acquiring an existing company. They are also known as “blank check companies”.

In the first nine months of 2020, blank-check companies raised over $40B, representing more capital than in the entire prior decade. Over half of the IPOs in 2020 have been SPACs.

The event was panel based and moderated by Robert Hoffman, CFA, co-founder and managing partner for Larix Capital Partners. Larix is a group of family offices, accomplished investors, and business builders focused on direct private investment opportunities. The event featured:

Jason Draho is head of Asset Allocation at UBS, and is responsible for tactical and strategic asset allocation in the US. Draho holds a Bachelor of Science degree from the University of Manitoba and a PhD in economics from Yale University.

James Graf has acted as a sponsor, manager and/or director in the SPAC world over the past 10 years. Graf is a graduate of the University of Chicago.

The panel provided an overview of SPACs, discussed SPAC investment and portfolio management considerations, addressed the rapid rise in popularity, and debated their future role in capital markets.

1. A sponsor raises money usually via a roadshow much like an IPO (this is where you invest)

2. The sponsor has 18-24 months to find a company to acquire a company with the invested funds

a. The sponsor finds a private company to bring public (using your investment) or,
b. If a suitable company is not found funds are returned to the investor

Is it as simple as that? No of course not. Although just about anyone can be a sponsor, many of us would be if it was that easy! Hoffman quizzed the panel for more details –

Hoffman – Why would a private company that wants to go public use a SPAC vs. an IPO?

Petruska – There are several benefits; one is certainty of execution – using a SPAC can close a deal despite poor market conditions as the funds are already in place. Additionally, SPACs are allowed to more fully market their story and compared with an IPO, and the time required for a SPAC to get to market is much quicker than for a typical IPO.

Graf – A SPAC makes for a good alternative when a company is highly leveraged as this type of company would not garner much interest using an IPO.

Hoffman – why are SPACs in vogue now, has something changed?

Graf – 20 years ago SPACs combined the right to vote (accept or reject a deal) with the redemption of one’s shares. Regulators have decoupled the right to vote and the right to redeem one’s shares, meaning investors can vote yes or no and still redeem their capital, making the voting process more perfunctory and enabling most deals to go through as planned. SPACs have become less dilutive (warrants are less of the value). SPAC’s have become a way for Private Equity firms to monetize their investment in private companies. Private Equity firms could also use a SPAC proceeds to finance future acquisitions.

Hoffman – what explained the recent performance starting in 2018?

Petruska – The SPAC market finally started to function the way it was designed. In ‘SPAC 1.0’ the investors were primarily made up of hedge funds. Those entities were more arbitrage oriented, with no intention of remaining an investor. With ‘SPAC 2.0’ the investor composition has changed, now often including blue chip entities like Black Rock. The SPAC investor lineup looks much like that of an IPO with fundamental and long-term oriented investors.

Hoffman – Why does it matter who the investor is?

Graf – The investor matters for a SPAC’s durability. The increased migration to longer term investors (retail and institutional) shows that SPAC can be a traditional investment product for the fundamental investor. The overall SPAC market has matured with additional of more fundamental investors, more certainty of closing, and much higher quality companies.

Hoffman – What is the role of a PIPE (private investment in public equity) in a SPAC?

Petruska – If the SPAC needs additional capital to pursue the business combination, the sponsor may use a PIPE to provide additional funds to the SPAC. Capital raised in the PIPE transaction helps structure an appropriate capital structure.

Hoffman – What are the future expectations for SPACs? Are more failed SPACs on the horizon? Will SPACs replace IPO’s?

Graf – SPACs will be more common in the future. There will be around 300 SPACs in 2021 and of those 50 will turn out to be broken SPACs.

Draho – 2021 will be the year of the SPAC acquisition, whereas 2020 was the year of the SPAC IPO. More investor money chasing deals will lower returns and raise prices. SPACs will provide options to companies looking for an exit strategy. This is more so for small to mid-size companies as a SPAC can’t handle larger (in market value) companies.

Petruska – Competition for quality assets will increase, but the overall size of the market will increase with the acceptance of the asset class as a strategic alternative for a company owner looking to monetize. There is still a learning curve for the market as to the benefits of a SPAC. The successful completion of a number of recent SPAC transactions has improved the acceptance and use. But 2020 might be the high point of the SPAC market.

Q – Since one of the benefits over an IPO is the reduced amount of due diligence, what are the future prospects of increased regulation?
Graf – As more retail investors use SPACs price volatility will invite the SEC to look more closely at the SPAC market.

Q – Where are the risks to SPAC investing?
Draho – The SPAC company is chosen by the sponsor. You (the investor) may not like the company chosen. Your only choice is to invest in that company or get your money back (less fees). There is dilution potential with the issued warrants. Historically SPAC price performance is underperformance in the ‘short’ term (Draho did not define what he considered short term).

Q – Are retail investors (the Robin Hood crowd) inflating a SPAC bubble?
Graf – Some recent SPACs were expensive.
Draho – Finding a fair value price is the same for SPACs and IPOs.

Q – Does a SPAC buy 100% of a company or can multiple companies be involved?
Graf – A SPAC can be configured as a single company deal, or have multiple companies but they must be part of one transaction.
Petruska – If there are two (or more) companies in a deal they are likely similar in terms of their product or service.

Q – What is the cost difference between SPAC and IPO?
Graf – An IPO is more cost effective. However, a SPAC is cheaper on a cash perspective but more expensive with warrant dilution. (The issuance of warrants is a common element to a SPAC deal).

Q – How do the sponsor economics work, what is their payoff?
Graf – Founder shares equal to 20% of the expanded capital is common is a common take for the sponsor but this is a negotiated percent. The sponsor can expect to earn 5% of the total shares of equity value.
Petruska – Since the size of the deals have gone up, dilution of warrants is not as impactful.

Q – Is it common for a SPAC to be used to take a carve–out to market?
Petruska – No, it is hard to prepare carve–out financials. This is where an IPO would be more useful.

Q – Is the investment / completion of a SPAC entail a tax event?
Graf – There is none, it should be a tax free event.

The discussion wrapped up nearly 75 minutes after the start. The details and nuances raised by the panel highlighted that a SPAC is an interesting investment vehicle. I will certainly pay more attention to future SPAC deals, but with a more developed point of view.

A recording of the Zoom event can be found on the CFA Society Chicago website and YouTube channel.