The Future of Oil & Gas 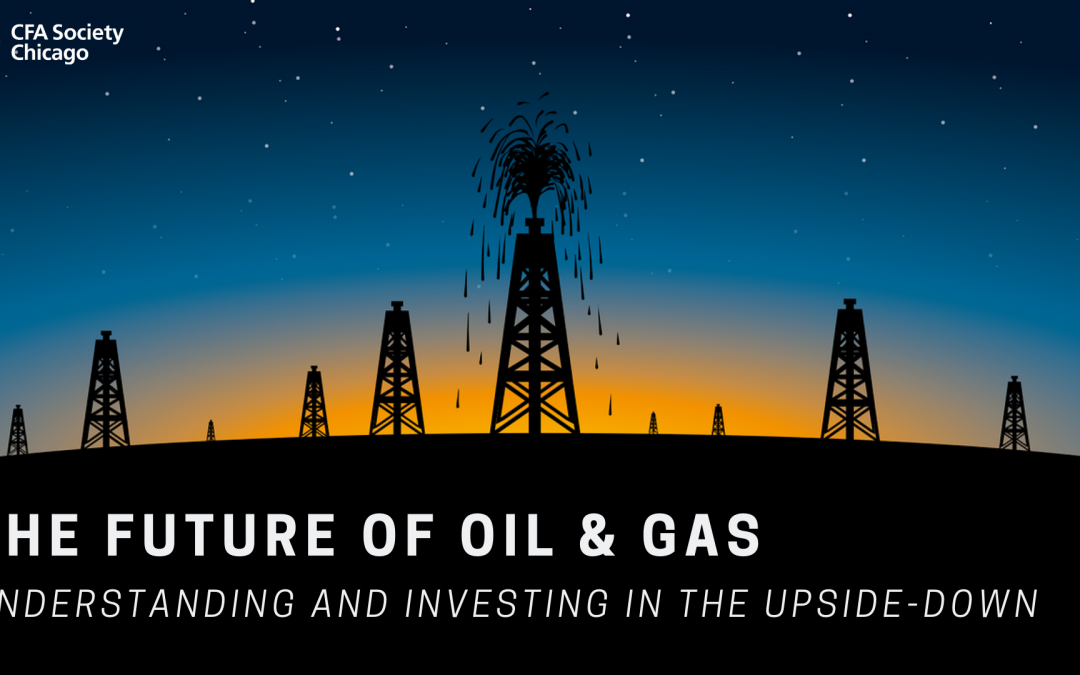 In introductory remarks, Keavey reflected on the scope, complexity, and importance of the Energy industry. For over thirty years, he has worked on gas pipelines, managed hedge funds, and now heads the Energy business at the CME Group. Sankey echoed one of Keavey’s comments that the energy industry is one of specialists. Sankey seeks to find experts in each of the complicated corners of the industry, and then follow them closely. One person cannot master the entire sector. West began by highlighting the need for more capital investment in Energy. Without new capital, the energy industry will become a wasteland. This would be an unfortunate outcome as global population growth and economic development will require oil and natural gas far into the future.

Flannery asked the weighty question “What is the long-term demand outlook for oil?” introducing the topic with an audience poll question. Most respondents believed that, by 2045, oil demand would fall versus consumption in 2019 of 100 million barrels of oil per day (mbpd). The poll showed that 23% agreed with OPEC’s base case forecast of 109 mbpd. The most popular answer was 92 mbpd, which is BP’s “Business as Usual Forecast” for 2045. The remaining 40% of respondents believed consumption would be 57 mbpd or lower by 2045. The panel was reluctant to quantify consumption 25 years into the future. A key determinant of the price of oil, Sankey and West agreed, is the assumed price of carbon used in emissions trading schemes. Keavey endorsed forecasts that oil consumption would increase for at least the next ten years.

Though the panel would not offer a demand forecast twenty-five years into the future, Sankey and West had high conviction in their short-term forecasts for oil demand. Both saw demand in 2021 above the level in 2019. The audience seemed to agree with this assessment. Flannery asked the audience what their expected price for WTI would be in 2022, compared to just under $45 on the day of the discussion. Only 11% of respondents believed the price would be below $45 per barrel by 2022. 17% saw an increase of at least 44%, with WTI trading at $65 or higher in 2022.

Keavey took on the topic of carbon trading. He explained that carbon trading is very fragmented today. Most of CME’s carbon trading customers are in the fossil fuel extraction business. Many of these customers seek to reduce methane emissions. A newer demand comes from Oil companies, who are trading sulfur in response to the new IMO 2020 regulations impacting fuel oil in shipping. West suggested the audience follow his lead by paying organizations to plant trees on their behalf. This is one of the most efficient means to offset a carbon footprint, West explained.

Flannery asked the panel to comment on the negative oil prices seen in April 2020. Keavey reviewed what he referred to as the fastest and most profound demand shift in history. Globally, 100 Mn barrels of oil were being consumed every day. Overnight, one-third of that global demand disappeared due to COVID lockdowns and travel restrictions. Supply could not adjust as quickly as demand, so oil kept flowing from wells and through pipelines. However, storage for oil is limited, and it filled up. Keavey explained that, unlike milk or other agricultural commodities, you cannot simply discard oil as it is toxic. Those who hold a long futures contract for oil at expiration are obliged to physically receive the oil. Sankey added that one futures contract is equivalent to 1,000 barrels, which would require multiple tanker trucks, which few parties have at their disposal. So, those who were long, but did not have storage capacity, had to pay others to take the oil from them. Hence, the negative prices. Keavey said that there were some signals, over a six-week period, of what culminated in negative prices, namely contango in the futures market, as well as price signals from gasoline as refineries shut down in response to reduced travel. In the panel’s opinion, oil prices will not go negative again as long as futures market participants recall the events of April 2020.

Flannery pivoted to OPEC, suggesting that most market observers expect a smooth meeting. Keavey shared that CME’s analysis sees an 83% chance of OPEC Oil output being maintained at current levels following the meeting. Sankey warned that the next OPEC meeting set for November 30, 2020, would not be smooth, with the Saudi Oil Minister perhaps a source of volatility.

The conversation turned to Capital Expenditures by Oil & Gas companies. West told the group that, with OPEC at full capacity by the end of 2021 and 3% decline rates, shale output needs to grow very rapidly, at 2.5 mbpd in each year from 2023 – 2025. He does not see the CapEx budgets reflecting such growth, however. Sankey agreed that supply would need to catch up with the increased demand next year. Sankey believes this cycle could be different, due to many bankruptcies in the US, with bellwether Chesapeake being the best example. Following these bankruptcies, fresh capital for CapEx may not be provided to all Oil and Gas companies as readily as in the past. For those who want to forecast CapEx, West offered a simple heuristic…changes in CapEx lag changes in the Oil price by six months.

“How cheap are Energy stocks?” Flannery probed further. Sankey believed that, if West’s forecasts proved accurate, then all energy stocks will be “4-baggers, at least.” Sankey finds valuation work elusive without a better understanding of the cost of capital for these companies. West does not want to be perceived as “Super-Bullish,” as he does not expect $100+ per barrel oil prices any time soon. Yet, his tone seemed bullish overall, particularly for companies heavily exposed to US Shale. He pointed to energy efficiency technology stocks as a less obvious, but quite attractive, investment opportunity. Flannery asked the audience to choose one of three investment scenarios for Exxon over the next five years. The response was neutral, with half choosing “Exxon Survives,” and a few more responses for “Exxon Thrives” than for “Exxon Downgraded.”

A question from the audience was “what characteristics of Energy companies signal an attractive investment opportunity?” Sankey advised investors to focus on management quality, specifically a history of sensible capital deployment. He highlighted Conoco and Chevron management as best-in-class, and Occidental Petroleum as bringing up the rear. Too often, management teams have invested large amounts of capital in low-return projects. He would even support the supermajors in shrinking their Invested Capital base, if that meant higher overall returns on capital. West’s advice was to invest in companies with differentiated technologies, in what is a commodity industry. Having pored over numerous patent applications, West seemed particularly optimistic about new technologies that would enable substantial productivity growth in extracting energy from shale.

The topic of decarbonization of the economy was addressed multiple times during the conversation. The most important step is to replace coal. More capital will be needed to support increased natural gas production to continue to supplant coal. According to Sankey and West, to reduce the carbon intensity of the economy, more attention should be placed on deleterious practices within the Agricultural Industry. The panelists were skeptical of government intervention in the Energy market. Sankey told the story of the “Cobra Effect” to underscore the lesson of unintended consequences from government participation in a market. Examples of government’s involvement in markets include the setting of carbon pricing and carbon emission limits, as well as subsidies bestowed on certain sub-industries or specific technologies. West and Sankey seemed to support a carbon tax, though, which would accelerate the demise of coal and could be politically popular if the proceeds were distributed evenly to everyone in the US with a Social Security number.

The final segment of the discussion veered away from oil and gas. We learned that the CME does not offer Turkey futures. And perhaps now is the right time to invest in fine wines, as the demand from restaurants has dried up during the pandemic.

In short, there is a future for the oil and gas industry. Natural Gas production in particular must increase robustly to meet growing global energy demand and to continue to replace coal, the dirtiest fossil fuel. From an equity investment perspective, Sankey advised the group to focus on the best capital allocators, citing Conoco and Chevron specifically. West was excited about energy efficiency stocks and shale E&Ps who have invested in differentiated extraction productivity technologies. The panel and audience had a neutral investment attitude toward the bellwether Exxon. Commodity investors would have heard a somewhat bullish tone regarding the price of oil through 2022.