The Impact of the Fed on the Corporate Bond ETF Market 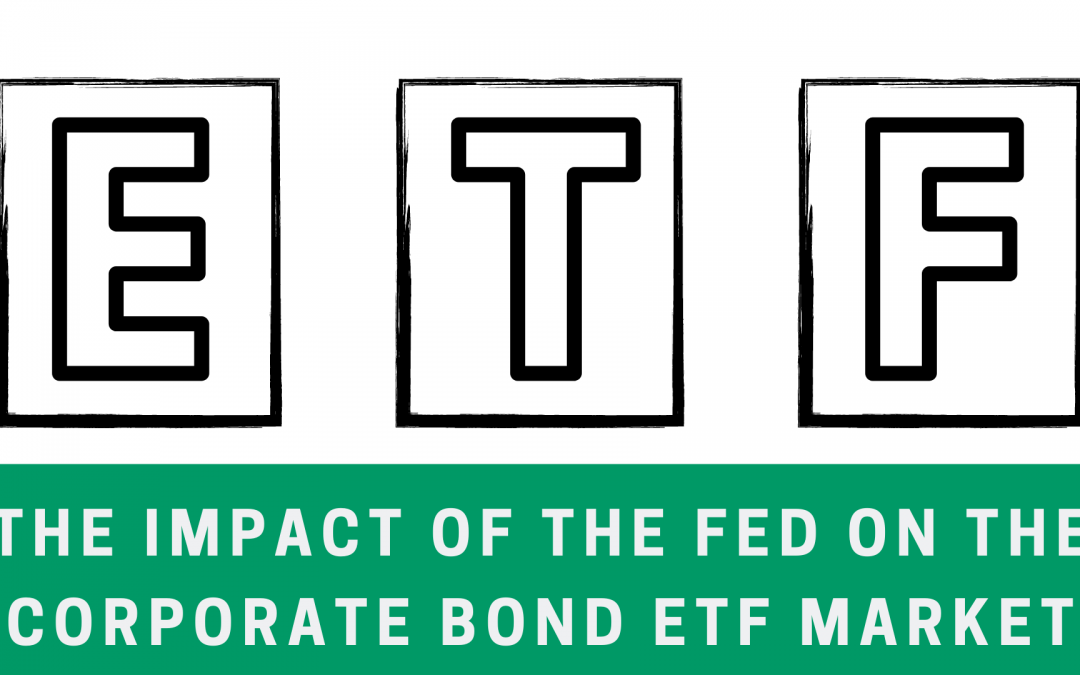 In early March the financial markets were struggling with the impact of the pandemic on the economy. On March 23, 2020, the Federal Reserve Board (“Fed”) took the unprecedented action of announcing that it would directly purchase corporate debt and corporate bond ETFs. On April 9, 2020, the Fed stated that its purchases would also include high yield corporate bond ETFs. It created a vehicle called the Secondary Market Corporate Credit Facility to enact this plan.

The corporate bond market was exhibiting extreme volatility; ETF prices reflected this volatility and traded at steep discounts. The impact and the subsequent actions of the Fed on the corporate bond ETF market was the topic of a webinar hosted by CFA Society Chicago’s Education Seminars Advisory Group held on May 27, 2020.

The conference featured two panelists: Jeff Kernagis, CFA, and Bradley Kotler. Kernagis is a senior portfolio manager at Invesco. Prior to joining Invesco, Kernagis was a portfolio manager at Claymore Securities. Kotler is vice president, SPDR Sales Execution and Implementation Group, at State Street Global Advisors. Kotler was a market maker of Fixed Income ETFs and Corporate Bonds for Knight Capital Group and Cantor Fitzgerald prior to joining State Street. Invesco and State Street are two of the biggest ETF providers.

The webinar was moderated by Richard Excell, CFA, an instructor of Finance at the University of Illinois, Geiss College of Business. In addition to his role at the University of Illinois, Excell is a senior portfolio manager at Wolverine Asset Management in Chicago where he oversees a concentrated long/short portfolio. Excell spent most of his career at UBS O’Connor where he was most recently managing director.

Excell introduced the two panelists and then asked a series of questions concerning the bond ETF market and how the Fed’s actions have affected this market. He started out by asking Kotler to give the viewers a brief tutorial on the liquidity of corporate bond ETFs.

Kotler outlined the liquidity provided the bond ETF market occurs in both the primary and second markets. In the primary market if demand exceeds supply a liquidity provider will sell shares to a client, to cover its “short” it will then source a basket of bonds eligible for inclusion in that particular ETF. In the secondary market buyers and sellers exchange shares at typically tight spreads.  The amount of individual bonds that need to be bought or sold to keep the bond ETF market liquid is relatively small.

In response to Excell’s question about the bonds permitted in a specific ETF, Kernagis stated that any bond appropriate for an index based ETF must exhibit the appropriate duration, sector, issue size and credit quality. Although the ETF is passive, there is an element of active portfolio management as the bonds comprising the ETF must be sampled to insure they provide the appropriate characteristics.

Excell inquired as to how or if corporate bond ETF’s were affecting the liquidity of individual corporate bonds. Kotler responded by stating that there was little evidence that ETFs were influencing the liquidity of the underlying cash bond market. He stated that even in the smaller high-yield market, only 4.9% of high yield bonds were in high yield ETFs and the bonds in those ETFs were the most liquid.

Kernagis was asked about the large amount of investment grade bonds that had been downgraded to junk and what affect that had on the high yield ETF market. He responded that indeed the amount of fallen angels (bonds downgraded from investment grade to junk) had dramatically increased in size in March. The Fed’s announcement on April 9, 2020, had specifically authorized the purchase of these bonds. The fallen angles index returned approximately 10% in March compared to investment grade which returned 6.3%. He attributed the outsize return in March directly to the Fed’s announcement. However, year-to-date the fallen angel index had fallen 5.3%, which compares favorably to the remainder of high yield which had fallen 6.4%.

Excell asked Kotler what conditions existed in the ETF market that motivated the Fed to make its announcement. He pointed to indiscriminate selling regardless of price, with no real ability to sell bonds in the cash market. ETF’s were included because they were the quickest way to add liquidity to the market. Selling individual bonds is more complex as each bond needs to be examined to ascertain if it is eligible.

The panelists were asked to describe the bond market during the month of March. Kernagis responded by stating six (6) of the ten (10) worst days in investment grade corporate bond history occurred in March of 2020. The worst day was March 18th when a record 5% selloff occurred. US listed bond ETF’s traded a total of $740 billion on exchanges. Kernagis concluded that despite dislocations in the market, bond ETF’s performed as they were meant to in a crisis.

Kotler was asked what kind of questions he was fielding from clients during the crisis period. He stated that clients were asking why bond ETF’s were trading at such large discounts and after the Fed’s announcement, what was the most effective way to trade bond ETFs. Kotler explained that during the crisis, as a result of the chaotic market, some NAV prices turned out to be unexecutable, suboptimal trading behavior by investors desperate for cash was common and dealers built a liquidity premium into their prices to compensate for the perceived increased risk.  After the Fed’s actions, clients decided to include more bond ETFs in their portfolios. Kotler advised them to trade when the bonds were most liquid, and for large sizes, seek out a liquidity provider on a consultative approach to adding exposure.

Excell asked Kotler if systematic strategies that are more commonly found in equities affect the bond ETF market. Kotler responded that systematic strategies do have an effect since bond ETFs are more easily tradeable than individual bonds.  Investors get exposure to the fixed income asset class and have the flexibility to trade as easily as equities.

As of the time of this webinar, the Fed’s actions have been relatively muted. Kotler stated that the Fed announced that it had begun buying ETF’s on May 12, 2020. Under the SMCCF it can purchase up to $250 billion of bond assets. The Fed will not purchase more than 20% of any one ETF. As of May 21, 2020, the Fed reported it had purchased $1.801 billion of ETF product. Per Kotler, they have been staying under the radar and the market has remained stable.

Excell questioned both panelists as to why the Fed so far has only purchased ETFs and not individual credits. Kernagis stated that with an ETF, the Fed gains access to hundreds of line items of bonds. If they only buy single issues, they may be open to accusations of not diversifying. Kotler stated that both bond ETFs and investment banks hold the most liquid part of the market. If the goal is to turnover that inventory over, then buying ETFs make sense. Excell wondered how the ETF market would handle higher volume. Kernagis stated that the largest Invesco fund is $1.4 billion of which the Fed could legally buy $400 million. He thought the market could easily handle even greater volume.

Both panelists spoke to how the Fed has affected ETF pricing since its announcement on March 23, 2020. They stated that the market reacted in the classic “don’t fight the Fed” form. Investors went to where they sensed the demand would be, and the Fed gave them good reason to buy bond ETF’s. Per Kotler, most of State Street’s products are marked to the bid side so a premium is expected. The large discounts to price found in early March quickly disappeared.

Liquidity improvement in the market has also been dramatic since the Fed announcement. Investment grade bid-ask spreads have come in 43% while high yield bid-ask spreads have come in 30%. In times of market dislocation, due to the difficulty of trading individual bonds, ETF volumes spike. Volume in the ETF market has since dropped relative to the cash market and large block trades no longer affect prices. These are signals of better market stability and liquidity.

Excell then asked Kernagis what changes in the dynamics of the ETF market he has seen throughout the course of the year. Kernagis responded by stating that prior to 2020, bond ETFs were mainly a retail product.  This year, due to market instability, institutions have taken a greater interest in ETFs. The Fed’s decision to use ETFs to inject liquidity has validated the asset class and it now appears to be a more real-time indicator of market movement.

Excell then took several questions from the audience. One question concerned itself with BlackRock and its involvement with the Fed.  Kernagis stated that the Fed chose BlackRock as sponsor of the program which made sense given that they are around 45% of the bond ETF market. While other firms can charge fees for transactions, BlackRock cannot.  Kotler stated that BlackRock’s Investment Management Agreement with the Fed prohibited information sharing on the market and also does not allow BlackRock to increase its ETF bond market share for the duration of the program.

Another audience question asked why the high yield and bank loan ETFs traded with less volatility and smaller discounts compared to safer short duration investment grade bonds ETFs. Kernagis responded that it was difficult to put a finger on a specific reason why this happened.  Trading high yield is inherently riskier and high yield bond ETFs sold may not be easy to get back once your need for cash diminishes. Kotler stated that the investment grade ETF market is much larger than the high yield ETF market. If you are raising cash, it was much easier to sell investment grade.

Other questions from the audience included getting the panel’s opinions on factor-based ETFs and on ways to improve pricing performance as some ETF issues suffer from lagging and stale NAV prices. Kernagis responded that Invesco offers several factor-based ETFs and its IG defensive fund has a year to date return of 4.0%, demonstrating that this factor-based portfolio was doing its job. In response to how to improve pricing performance, Kotler noted that bonds have no exchange, no central limit order book and no required mandatory quotes from dealers.  Kotler cited the need for better methodology for tracing screen prints. Kernagis cited wide differences in pricing for two very similar bond ETFs that occurred during March. He stated that the SEC may begin looking for ways to improve bond pricing. Perhaps this crisis will spur some changes; certainly the rise of electronic trading platforms for bonds gives a valuable source of information that needs to see more use.

Excell’s final question concerned the impact on the bond market of the record amount of new issuance that has occurred in the market over the past two months. Kernagis replied that the market has absorbed the new supply extremely well. New issues spreads have come in once they began to trade in the secondary market, a sign of a healthy market. Kotler has observed the same trends.

The phrase “Don’t Fight the Fed” was first coined by Martin Zweig in his 1970 book Winning on Wall Street. The term sounds naïve and simplistic; however, over the course of the years this has proven to be the correct action to take. The effect of the Fed on the bond market during the past several months continues to support this thesis.