Thrown for a Loop Scavenger Hunt

CFA Society Chicago has an established history of working to promote thoughtful analysis and prudent decision making among its members. But how adept would its members be at navigating and scrutinizing the very city they live and work in every day? On August 27th about thirty CFA Society Chicago members sought to prove their analytical skill outside the office at the Thrown for a Loop Scavenger Hunt. The event was organized by the CFA Social Advisory Group and conducted by Watson Adventures, a vendor who specializes in conducting scavenger hunts and has a footprint in several major cities.

Watson Adventures’ hunts are not scavenger hunts in the traditional sense in which participants locate and collect items based on clues, but are instead information-based scavenger hunts. Participants receive lists of hints prompting them to visit certain locations, examine details about those places, and answer cryptically-worded questions. As the name of the event suggests, the location for the CFA Chicago hunt was the entire Chicago Loop and the buildings and landmarks within the area. After assembling at Daley Plaza, participants were divided into teams of four or five by the Watson staff and sent out into the Loop with their question lists to begin hunting. The questions led members through sites such as the Chicago Cultural Center, Millennium Park, and City Hall. Sites that members might pass by on their daily commute became objects of detailed investigation as teams searched for correct answers. Watson Adventures protects the details of its hunts closely, rightly treating them like intellectual property, so we’re not at liberty to provide too many details here. But just to give a sense of the detail involved: how familiar are you with the gargoyles on the facade of the University Club? 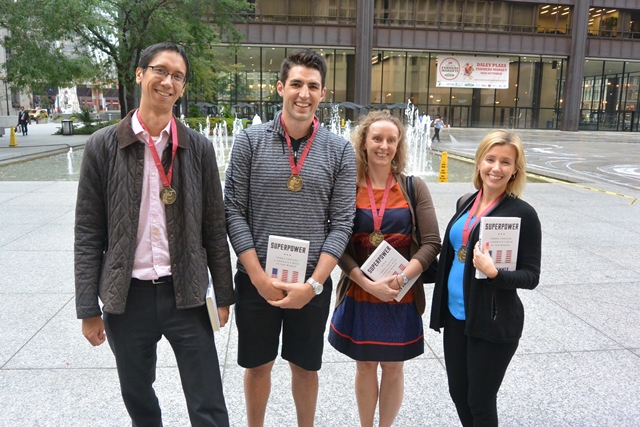 The Watson Adventures staff had also prepared some bonus tasks specifically for CFA Society Chicago that gave participants extra points for their scavenger hunt team score. In one task, participants got extra points for taking a photo of their team acting out “Community,” one of the five CFA Society Chicago organizational pillars. In another task, teams had to take a picture of themselves standing in front of a financial institution’s signage while pretending to flash trading pit signals. Scores between the participating teams were incredibly close, so bashful teams ignored these optional tasks at their own peril.

After an hour and a half of hunting, teams reassembled at Daley Plaza where Watson Adventures staff collected answer sheets and added up the scores. The winning team consisting of Mark Cichra, Caroline Frensko, Casey Hatch, and April Heitz, won by only a single point. CFA Society Chicago members thanked the Watson staff and expressed gratitude to each other for the team-building and camaraderie. Afterwards, participants gathered at nearby Randolph Tavern for drinks and conversation.

For more information about upcoming events organized by the CFA Social Advisory Group, check the Events page on the CFA Society Chicago website.