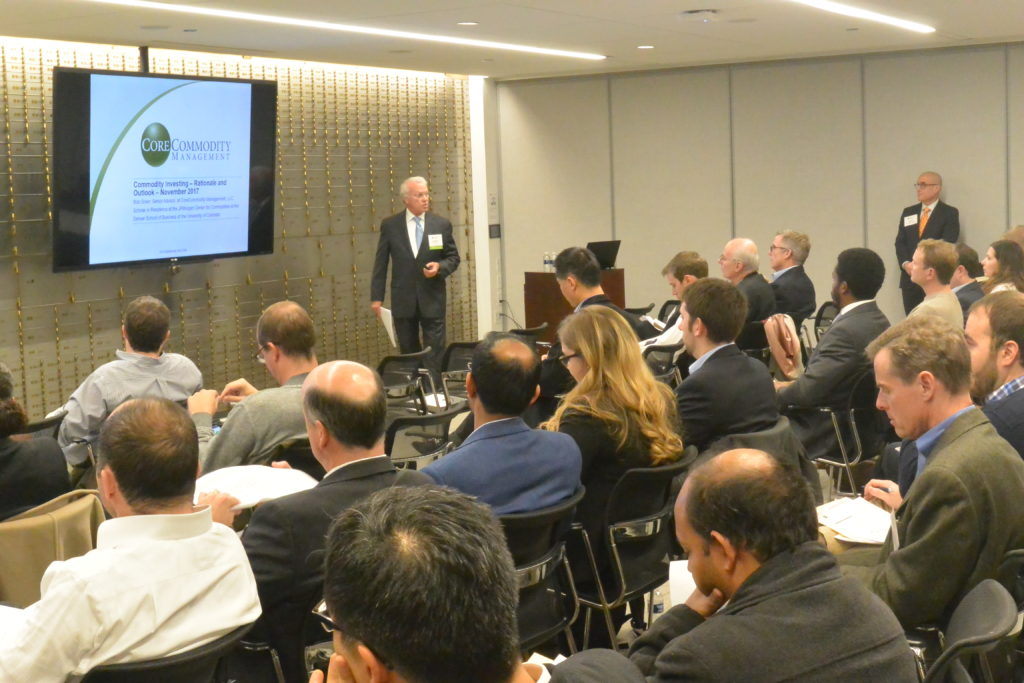 The why and how of commodity investing–especially when considered as a core position in a well-balanced portfolio–was the topic of the latest CFA Society Chicago Vault Series event held on November 28th, 2017. The presenter was Bob Greer, Senior Advisor at CoreCommodity Management LLC, and Scholar in Residence at the JP Morgan Center for Commodities at the Denver School of Business of the University of Colorado.

Commodities as a Hedge Against Inflation

Greer began by presenting a ten year chart of the Bloomberg Commodity Spot Index (slide 2) which showed considerable swings from highs to lows, but not an impressive net average annual gain. However, for comparison he pointed to other periods when large cap stocks (measured by the S&P 500 Index) provided similarly bland returns—for example, the decades ending in 1974 and 2008 (slide 3). Rather, it’s when one looks at commodities in a portfolio reaching across asset classes that the benefits show up in diversification and the contribution to risk-adjusted returns. This has been especially true during periods of rising inflation when commodities have provided returns that vastly exceed those of bonds and global equities–and even beat natural resource equities by several hundred basis points (slide 4).  This performance, in turn, stems from the high correlation commodities have to inflation—especially unexpected inflation (slides 5 & 6). Unexpected inflation is the investor’s worst enemy in that it has been a major factor in extremely poor, highly correlated returns for both equities and fixed income. Conversely, periods of high unexpected inflation are precisely when commodities have been at their best. Because inflation has been low for a long time, unexpected inflation may have faded from investors’ memories, but Bob offered a list of reasons why that could change soon: 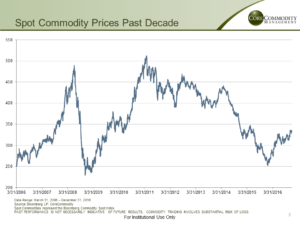 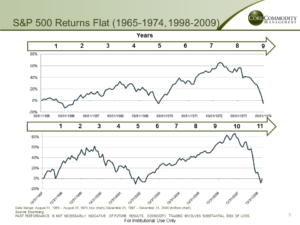 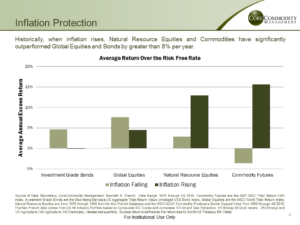 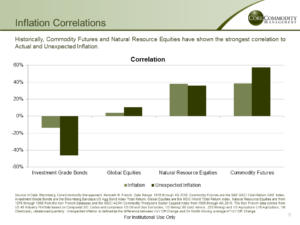 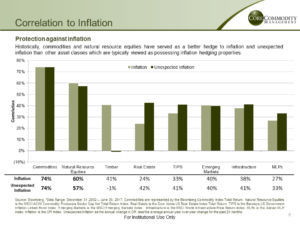 Commodities as a Diversifying Element

Besides performing as a good inflation hedge, commodities have also performed well as a diversifying element. Greer presented a chart (slide 8) of three year correlations between commodities, stocks, and bonds that showed, at least until the 2008 financial crisis, that pairing commodities with stocks and bonds, diversified as well as the more common stock/bond pairing. During the crisis, this benefit broke down as the unprecedented need for liquidity among all types of investors, raised correlations for many asset classes far beyond anything measured in the past. 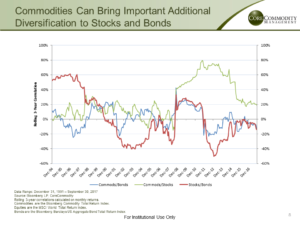 Successful commodity investing calls for active management in Greer’s view.  He compared the returns of the Bloomberg indices of spot and futures commodity prices from 2001-17 (slide 9).  While both were volatile, the spot prices generated a cumulative return of about 150%, but the futures prices ended with a small negative cumulative return.  Because the price curve of most futures contracts exhibits a positive slope, rolling out of an expiring contract and extending into a new, longer contract, usually creates a loss. This “negative roll yield” causes the persistent return lag in commodity futures portfolios, and is a primary reason Bob advocates for an active strategy in commodity investing. Commodity futures are less subject to the forces of “irrational exuberance” because there is no limitation on the number of contracts that may trade, and futures prices must converge with cash market prices eventually. This makes analysis of commodity futures prices more effective than for other asset classes. Among the tools managers use to beat the index are: 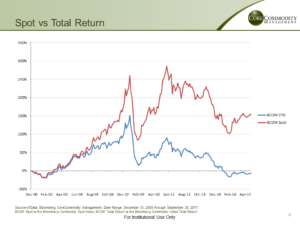 One metric managers use in applying these tools is a comparison of commodity prices relative to the underlying cost of production (slides 11-12). Over long periods, prices have averaged 30-35% above the cost of production but with significant variability (and including occasional periods of a discount relationship). This applies not only in the aggregate, but also among the various commodities within the Bloomberg Commodity Index. Recent data for the prices of the index members showed a range from a discount of 29% below the cost of production (for Kansas City Board of Trade Wheat) to a premium of 71% (for London Metals Exchange Zinc). 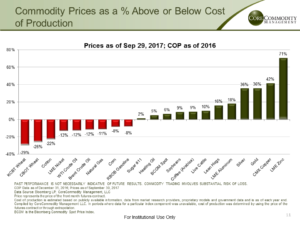 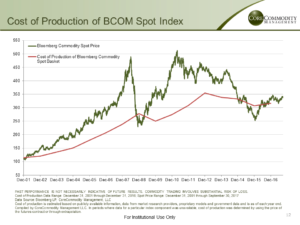 Commodities as an Asset Class

After laying out his reasoning for including commodities in a well-diversified asset allocation model, Greer explained why the timing is good now for an initial investment into commodity futures. The basic reason? They are cheap relative to the more common asset classes (slide 13). Of the twenty-two constituents in the Bloomberg index, only zinc currently trades above 50% if its long term value. By comparison, stocks, bonds, and REITs are all currently above the 95% mark. Global demographic and economic developments indicate a long term rising trend in the demand for all manner of commodities.  World population continues to grow (slide 19), with a concentration in developing countries. Economic growth in these countries will engender an increasing demand for commodities broadly. This is already reflected in changing dietary habits in developing countries where the consumption of meat in all forms is increasing (while it declines in the U.S.). This has knock-on effects on the prices of grains needed to produce the meat (slides 20 & 21).  Growth in developing economies also increases demand for energy (mainly oil) and metals and industrial goods (to build out infrastructure). Graphs displaying the consumption of corn, wheat, copper, coffee, and oil all show persistent, long term rising trends (slide 22). 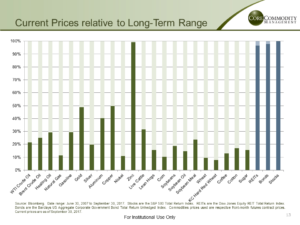 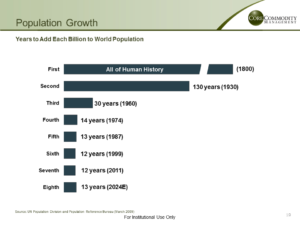 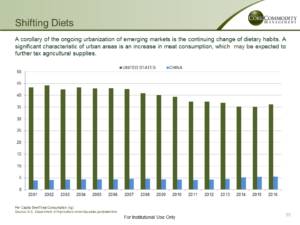 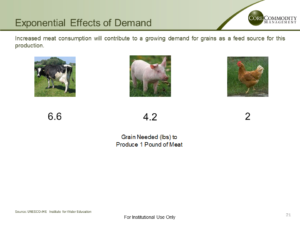 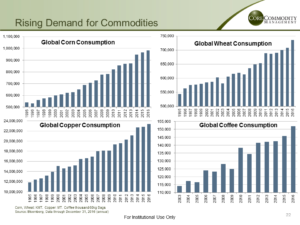 Greer provided greater detail regarding the supply and demand for oil. The two most populous countries in the world, China and India consume significantly less energy per capita in the form of oil than developed, slow growing, Japan and the United States (slides 24-26). So, as their economies develop and grow faster than the developed world, China and India will drive global oil demand. Meanwhile the spare productive capacity of OPEC countries has been declining since 2009 (slide 27) and shale oil production in the U.S. is still a small contributor to global supply–just 5% (slide 28).  Thus the long term trend in global economic growth, driven by the developing world, argues for an allocation to commodities as a contributor to both returns and diversification in a well-balanced portfolio. 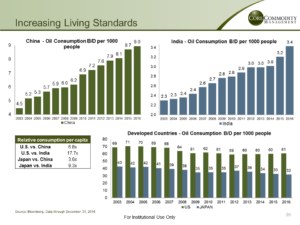 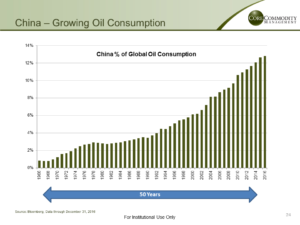 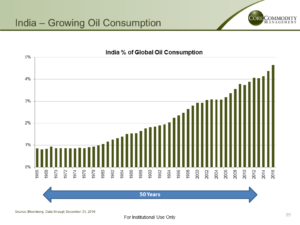 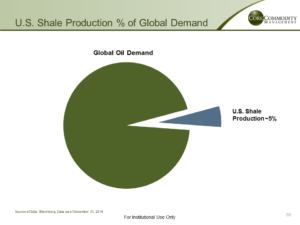 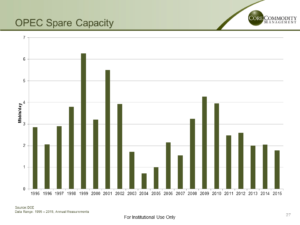