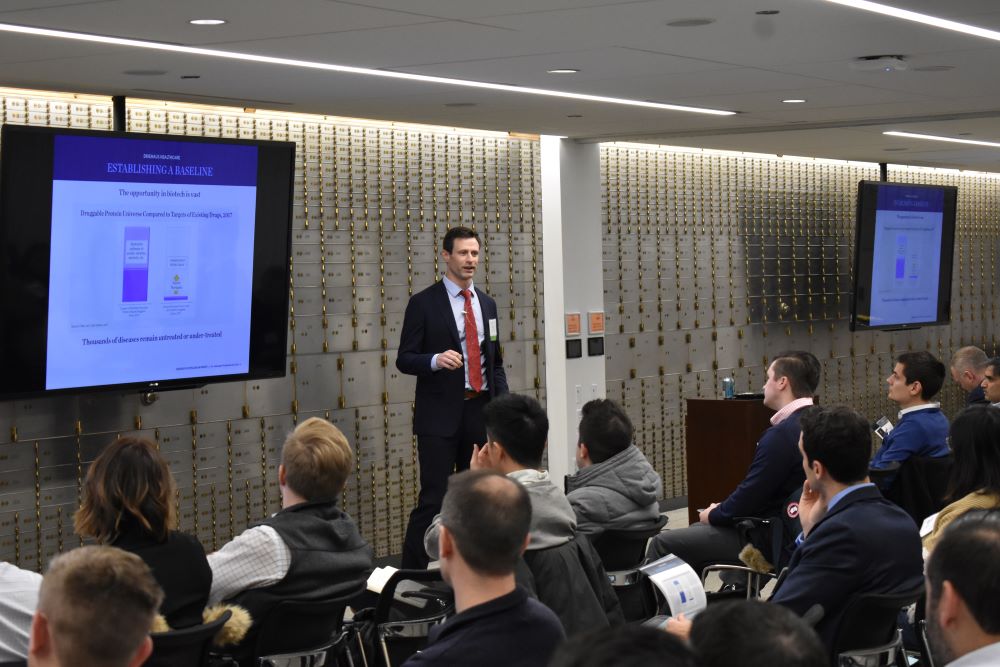 No EBITDA, no revenue, no product. What’s not to like?

Despite being fraught with risk, investing in biotech stocks can be highly lucrative. Michael Caldwell, a portfolio manager at Driehaus Capital Management led a highly interactive discussion with a roomful of captivated attendees. Caldwell has been at Driehaus since 2007 and has a BS in biomedical engineering, which he opined wasn’t necessary in order to do his job, but certainly helps with understanding the vocabulary within the biotech world.

“People think that biotech is a black box, a gamble,” Caldwell said. This is because success for companies is often binary with respect to the drugs they develop. The extreme outcomes coupled with the complexity of the science involved make investment analysis very difficult. The odds of creating a successful product are quite stark indeed: Caldwell estimates that 90% of the drugs the biotech industry creates fail to reach the consumer market. With such a high rate of failure, how can investors in this lucrative, yet little understood asset class give themselves an advantage? As Caldwell put it in his presentation, “If biotech is a gamble, then let’s count the cards.”

There is currently a biotech renaissance taking place, in part driven by a precipitous decline in costs for DNA sequencing, and the biological insights that result. Scientists had first sequenced the human genome in the early 2000s and initially it was incredibly expensive to do. Since then, firms such as Illumina have helped provide mass availability for biotech firms seeking to sequence DNA and produce drugs.

Caldwell explained that DNA (which he termed “the software on which life runs”) encodes RNA, which in turn makes proteins. In order to create a viable medicine, specific proteins inside of our bodies are targeted. Right now, only ~600 proteins are targeted by approved medicines out of a possible 20,000, so the runway is long. Disease can occur when one of these proteins does something wrong.

Given the incredible potential for high returns within biotech stocks (Caldwell cited several successful investments including Loxo Oncology), how would one go about analyzing the companies and selecting the best ones? Caldwell presented a checklist of metrics Driehaus looks for including strong intellectual property, robust biological rationale, safety and dosing schemes, competition, market size, timeline and management. This is the method they have found creates the most value given the complexity of the space.

Caldwell then discussed some of the points in finer detail, including assessing intellectual property (IP). The IP biotech firms own represents a barrier to entry that can offer a strong shield against competition, depending on what the patents are based upon. He explained that the molecule composition is seen as the highest form of intellectual property. Driehaus aims to invest in companies that utilize what Caldwell described as “good biology”. He talked about the biological cascade, a series of biochemical reactions that often begin with a single gene mutation; these single gene diseases – termed monogenic – can be examples of “good biology” because the biological cascade of disease is often characterized.

Bad biology would refer to companies that focus on the correlation between a mutation and disease with an absence of causation, as an example. One area of intense research is Alzheimer’s disease. Nearly every Alzheimer’s study has failed because the disease still isn’t well understood.

Array Biopharma was another biotech company mentioned that Driehaus researched and ultimately invested in. Caldwell said that the biology was good, its clinical strategy favorable, and the drug had a strong market potential. They decided to invest in fall of 2017. There was a colorectal cancer trial that Driehaus expected would work.  The stock traded sideways for over a year, until good results from the trial were released.  Shortly thereafter, Pfizer announced their intention to acquire Array, generating a huge return.

A key area of focus for Driehaus is what Caldwell termed “precision medicine”, which can be described as an approach to healthcare that allows doctors to select treatments that are personalized to each patient’s genetics. This technique can be applied to all disease areas but has mainly been used in the realm of oncology. Usually when a Driehaus analyst hears about a precision oncology strategy their ears perk up and they tend to do more research. Precision medicine is typically used by smaller biotech firms, and much less frequently by larger multinational pharmaceutical companies. This is because the types of products created by precision medicine methods often target ailments that wouldn’t generate enough revenue to move the needle for a massive international pharma firm but can still be good businesses that create billions in market value.

How risky will the 2020 elections be for biotech investors? Caldwell said that they think about it, but it might not be as bad as the headlines lead you to believe. Right now, the United Kingdom is the stingiest healthcare sponsor in the world when it comes to paying for expensive drugs. If the US were to go down a similar path, that would hamper sales for some of the higher volume drugs. But, as Caldwell pointed out, if you can locate truly life-changing drugs and invest in the companies making them, there is still significant value to be created and captured. Regulation is another ever-present risk, as is competition.

This was a very comprehensive and interactive introduction to the exciting, impactful world of biotech and investors will likely be increasingly interested in the space as advances in science continue.