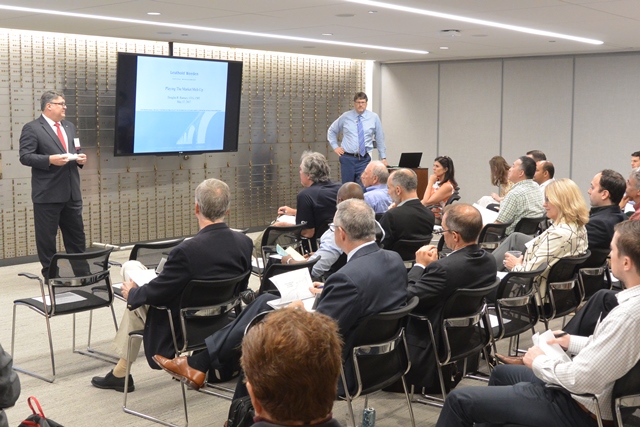 The CFA Society Chicago gathered in the Vault Room at 33 North LaSalle to hear Doug Ramsey, CFA of Leuthold Weeden Capital Management discuss the likely future direction of the equity market. Ramsey is the CIO of The Leuthold Group and co-portfolio manager of the Leuthold Core Investment Fund and Leuthold Global Fund. .

Ramsey is both a CFA charterholder and a Chartered Market Technician (“CMT”). Holders of the CMT have demonstrated expertise in the theory, practice and application of technical analysis. He maintains Leuthold’s proprietary Major Trend Index, a multi-factor model that utilizes mainly technical data. The model contains a long history of market data going back to 1930. The data and subsequent market behavior discussed in the Vault Room included data up to May 12th of this year.

The Major Trend Index is comprised of 130 indicators that roll-up into 5 categories. The categories are comprised of quantitative and qualitative factors that influence the direction of markets. A plus and minus figure is computed for each category and a ratio that includes all the data is computed. The Major Trend Index yielded a ratio of 1.14 as of May 12th,  a ratio over 1.00 is considered bullish.

The model used by Ramsey uses seven (7) stock market indices to monitor the health of the equity market.  They are as follows:

Negative performance in at least 5 of these 7 categories has foretold a market top. Ramsey characterizes a market top as a “lonely” one. The bull market is propelled at its end by only one or two sectors before a bear market begins. 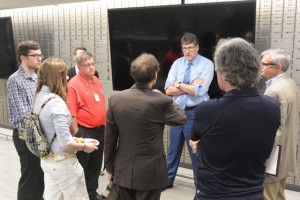 Ramsey then spoke at some length about the market sell-off that occurred at the beginning of 2016 and its effect on the current bull market. In May of 2015 six (6) of the seven (7) categories were in negative territory which is a strong indication of a market top. The equity market was essentially flat in 2015 and the beginning of 2016 a market correction occurred. A bear market did not occur as the index only fell 14%, by definition a bear market does not begin before a 20% sell-off.

The fact that a bear market did not occur after the 2015 signal does not necessarily negate the usefulness of the model. The year 2015 coincided with a trough in corporate earnings and the market reflected that. Ramsey believes that the 14% pullback that occurred in early 2016 has given new life to the current bull market which in his opinion does not look to have reached its top.

Following his presentation Ramsey spoke with a group of attendees on a number of topics including: