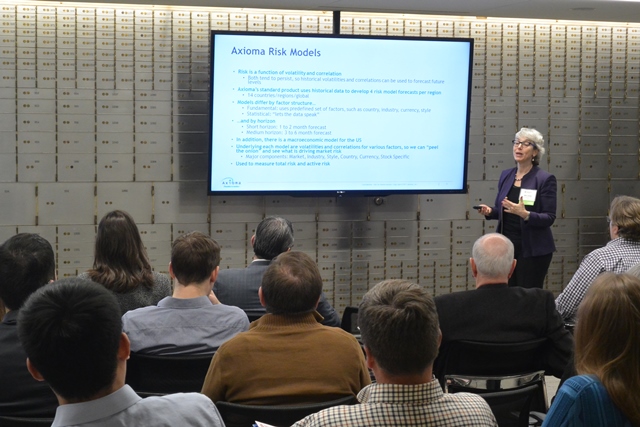 Managing risk, specifically equity market risk, was the topic of CFA Society Chicago’s new Vault Series on January 11. The series brings noted investment experts to Chicago on a bi-monthly basis to share their thoughts and insights on the investment scene. The name comes from the common-area conference room in the Society’s new home at 33 North LaSalle Street, a space that was, indeed, once the safe deposit vault for a bank. The latest flat screen video monitors hang over the bare steel safe deposit boxes still line the walls. The day’s speaker was Melissa Brown, CFA, Senior Director of Applied Research at Axioma, a provider of risk management and portfolio analysis models and tools serving asset managers and institutional investors. Brown provides perspective and insight on market risks as measured and quantified by Axioma’s data and analytics.

Brown began by noting there are many types and measures of risks (e.g., Value at Risk, standard deviation, credit risk, liquidity risk, etc.) but Axioma defines it as the expected volatility of a market (they focus on equity markets) over a defined investment horizon. It is a function of volatility and correlations, both of which they see as being persistent over time, and therefore possible to forecast from the past. Currently, Axioma sees benchmark risks as low, but volatility is unlikely to decline further. In 2016, volatility declined in most equity markets around the world, despite a jump in mid-year following the “Brexit” vote. This was more pronounced in U. S. markets than other countries, and also in developed markets more than emerging markets. The level of volatility at the end of the year was not materially different from levels in 2000.

The last one, correlations, is very low now and is the reason market volatility is low despite the relatively high volatility of individual securities.  Sector also plays an important role here. In the U. S. in 2016 there was a wide dispersion of risks and returns by sector. Consumer discretionary, Technology, Energy, and Materials all did well with declining risk. Finance, real estate, telecom, and utilities had very mixed results, but also with generally lower risk (except for finance). The dispersion of sector returns peaked in November at levels near records for Axioma’s database. Brown pointed out that the low correlations could provide an opportunity for active management to outperform passive.

Taking an international view, Brown noted that as of the end of the year, risk in developed markets is highly concentrated (see Italy, Greece, and Iceland) while in emerging markets, risk is more widely (and evenly) scattered. This situation developed during the fourth quarter and reflects the strength of the dollar, which is more of a challenge for emerging markets than for developed. Switzerland just nudged out the U. S. for the lowest risk by country at year end. Mexico holds the distinction as the riskiest country, again reflecting the weakness of the peso since the U. S. election.