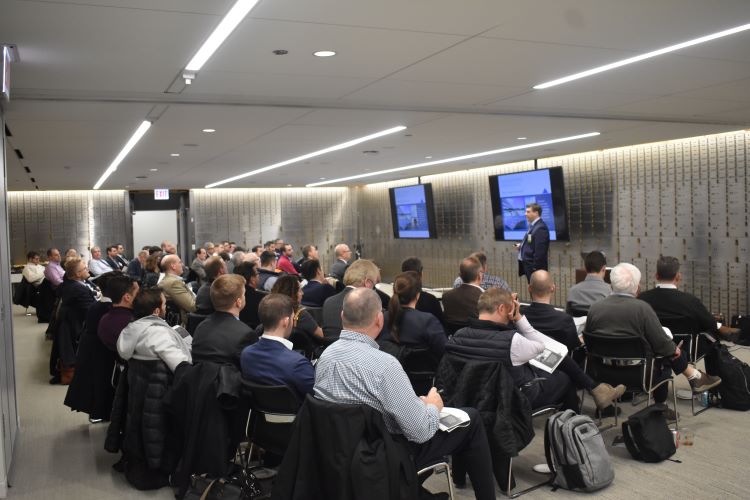 The Past, Present, and Future of MLPs and Energy Infrastructure

On January 9, 2020, CFA Society Chicago hosted its Vault Series featuring Brett Jergens, CFA, CFP to give his views on the MLP market. Jergens currently serves as vice president of the Tortoise Energy Independence closed-end fund. Tortoise invests in essential assets – energy related assets and services that are indispensable to the economy and society. Previously Jergens was a vice president at Enterprise Bank & Trust, a financial planner and head of investments at Searcy Financial Services, and a tax accountant at KPMG. He earned Bachelor of Science degrees in finance and accounting from Kansas State University.

Jergens explained that energy infrastructure focuses on the delivery of energy via, pipeline, tanker, rail, etc. Companies in this space include pipeline companies, midstream MLPs (Master Limited Partnerships), and gathering and processing specialists. MLPs as an investment vehicle are unique in that an MLP must earn at least 90% of its gross income from qualifying sources, eg; transportation, processing, storage, and production of natural resources or minerals. MLPs are not subject to corporate taxation, they act as pass-through entities. Depreciation typically exceeds income, so the majority of an investor’s distribution serves to reduce the cost basis of the investment, which reduces the taxes owed in the current year.

Jergens explained that pipelines had been used the U.S. since the 1800’s, but during World War II moving oil safely became a critical need. German U-boats threatened tankers that were moving oil from the gulf to the north-eastern U.S. To combat this threat the U.S. government built two pipelines (the Big Inch and Little Big Inch) from Texas to New Jersey. The completion of these pipelines made possible the delivery of large quantities of oil and refined products for Allied use in the war. This project was the advent of large scale pipelines that now cross much of the U.S. and Canada.

The MLP space has grown dramatically since the Big/Little Inch projects. As little as ten years ago, U.S. oil production was at nominal levels. As of 2019 the U.S. is the largest producer of crude oil in the world surpassing Saudi Arabia. Unfortunately production of crude oil and natural gas has greatly exceeded demand estimates in recent years. In part because of this overproduction the MLP market has struggled. Jergens advised that current and estimated valuations in terms of enterprise value to EBITDA are below the long-term average, and Tortoise projects long-term total return expectations in the 7%-11% range. Given these expectations, Jergens believes the MLP space can produce above average market returns in coming years.

The MLP market faces other challenges aside from a supply/demand imbalance. The 2020 election naturally brings uncertainty to many sectors not just the MLP space. Some democratic candidates have laid out punitive plans to reduce fracking and drilling. On a state level, there are a number of initiatives would restrict fracking, and the trade dispute with China also poses problems. China has applied tariffs on liquefied natural gas (LNG), a commodity where the U.S. is a natural exporter.

There are significant up sides to investing in the MP space – energy demand is increasing, has increased 35 out of the past 36 years, and is expected to continue to increase. Energy demand is driven by two factors; population growth and economic growth. World population is forecast to grow to 9.8 billion people by 2050 from a current 7.6 billion today. Economic growth over the next 20-30 years should be robust as a large portion of the world population will shift to being energy grid consumers (especially in China, India, Indonesia, and the African continent). Demand growth for electricity is forecasted to double by 2050, while the majority of energy supply growth is expected to come from renewables and natural gas.

Jergen’s shifted to the effects of ESG on the MLP market advising that the global energy system faces a duel challenge: the need for more energy but produce a smaller carbon footprint. The U.S. is on a virtuous path of ramping up production of natural gas and in turn replacing its reliance on coal based generation of power – U.S. carbon emissions are trending down. However, China and India have grown their reliance on coal based electric generation, growing their carbon footprint. These countries in particular will increase their middle class population thereby increasing overall demand for energy. What will be the source of this energy? Will the demand be met by coal based carbon intensive sources or a cleaner natural gas solution?

I thought Jergens made a compelling case for investment in MLP energy products, in particular LNG. The investment case was made on straight demand / supply needs. Population growth continues and the movement of large portions of 3rd world populations to energy grid consumers will put pressure on overall energy demand. From an environmental perspective, less intensive carbon based energy is an easy sell for me. Let’s just hope the world economies and the capital markets agree.