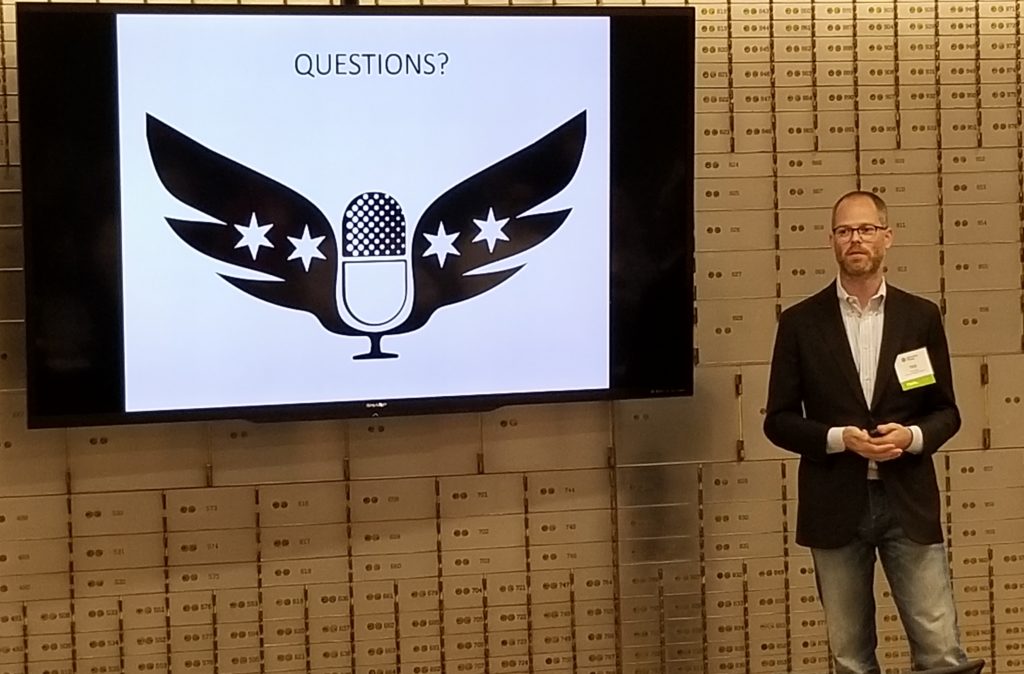 CFA Society Chicago hosted its first Vault Series event of the year on July 16th featuring Chicago Media Angels (CMA) Founder and Executive Director Ted Reilly. Chicago Media Angels is an investment group seeking attractive returns through financing content in the media and entertainment industries. Reilly spoke about media as an asset class and shared interesting insights into the group’s sourcing, funding and development of such content in Chicago.

Reilly ended up in the Midwest by way of Notre Dame and began his career with Goldman Sachs Private Wealth Management where he held various positions over seven years. During this time, he discovered that his passion was helping entrepreneurs develop their businesses yet his job was convincing them to sell their companies and invest the proceeds.

Reilly left Goldman in 2011 and over the next three years produced a documentary in Uganda about a young medical student. He truly loved the experience and wanted to continue this work but didn’t know how to make a living doing so. With his interest piqued, he immersed himself in the local start up scene and joined Notre Dame’s Angel Fund, Irish Angels, in 2012 to deepen his knowledge about angel investing. 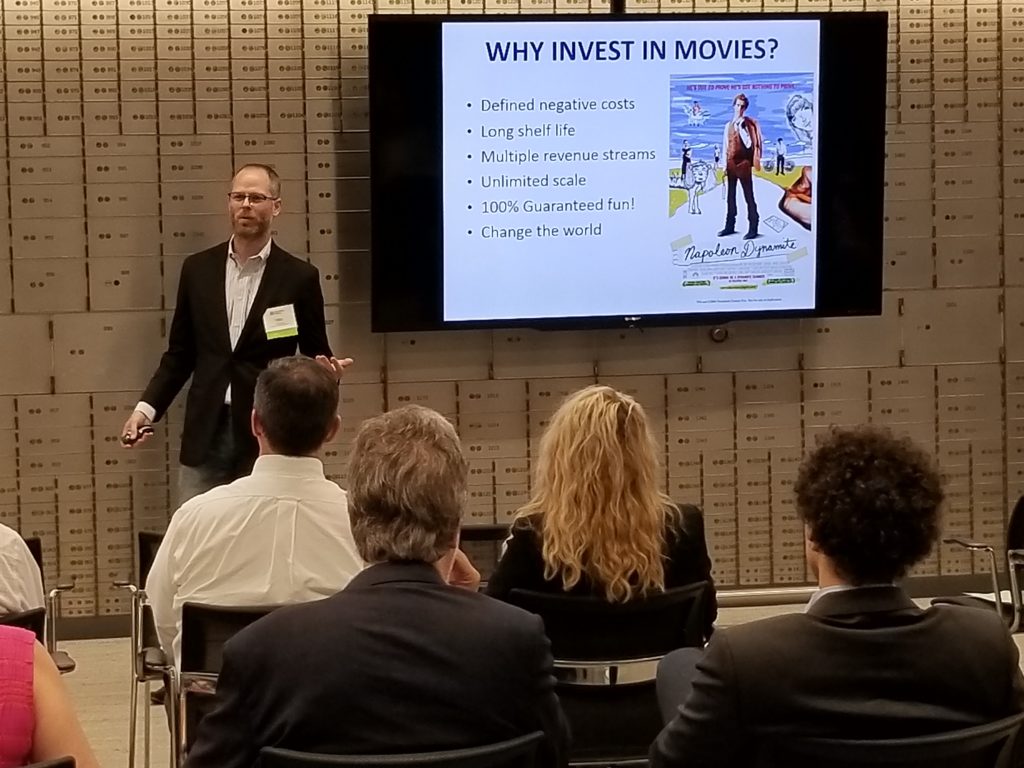 During this period he was searching for mentors when he read an article in Forbes about Steve Jobs. Following his firing from Apple, he sold his shares for $100 million. After his first $50 million investment in another tech company failed, he took his last $50 million to a small startup named Pixar, where he became a billionaire as a film producer. This proved to Reilly there was definitely money to be made in media.

A few years later he presented the notion of investing in movies to Irish Angels and when they weren’t open to the idea, he created Chicago Media Angels. Reilly shared that the biggest realization of angel investing is that you’re looking for Unicorns: Angel Investor = Unicorn Hunter! He said a lot of angel investors just keep trying to make deals work, when in fact they won’t.

There are a number of reasons movie investing is desirable. One of the biggest is the defined negative costs – once financed there isn’t a reliance on future rounds of financing. Adding to that, once a film is made, it can be monetized into perpetuity through various revenue streams. Reilly used Napoleon Dynamite as an example – it was made for $400,000 in 2004 and brought in 48 million at the box office and continues to bring in residuals to this day. In fact, a Napoleon Dynamite doll is being released this summer, some 15 years later.

Chicago Media Angels has grown to 50+ investors and is targeting 100 total. To join it requires a $2,500 annual fee and a $5,000 minimum investment in a deal(s) of your choice. Since hanging their shingle, they have received 3,500 submissions for financing and presented 30 deals to investors. The group views two times budget as an attractive valuation and invests between $250,000 and $1.2 million per deal in low budget independent films.  With the change in technology from film to digital, production costs have come way down.  They prefer movies that are as ready to produce as possible and don’t provide funding until filming starts and distribute the investment throughout filming.  Equity is split 50/50 between producers and investors, and investors receive their money back first.

The cash flow of a film breaks down as follows:

Current CMA investments comprise nine equity financings including six feature films, one episodic pilot (Public Housing Unit), one web series, and one content/technology company. To date CMA Digital Studios has vetted over 300 submissions and whittled those down to five that they will be producing next year. 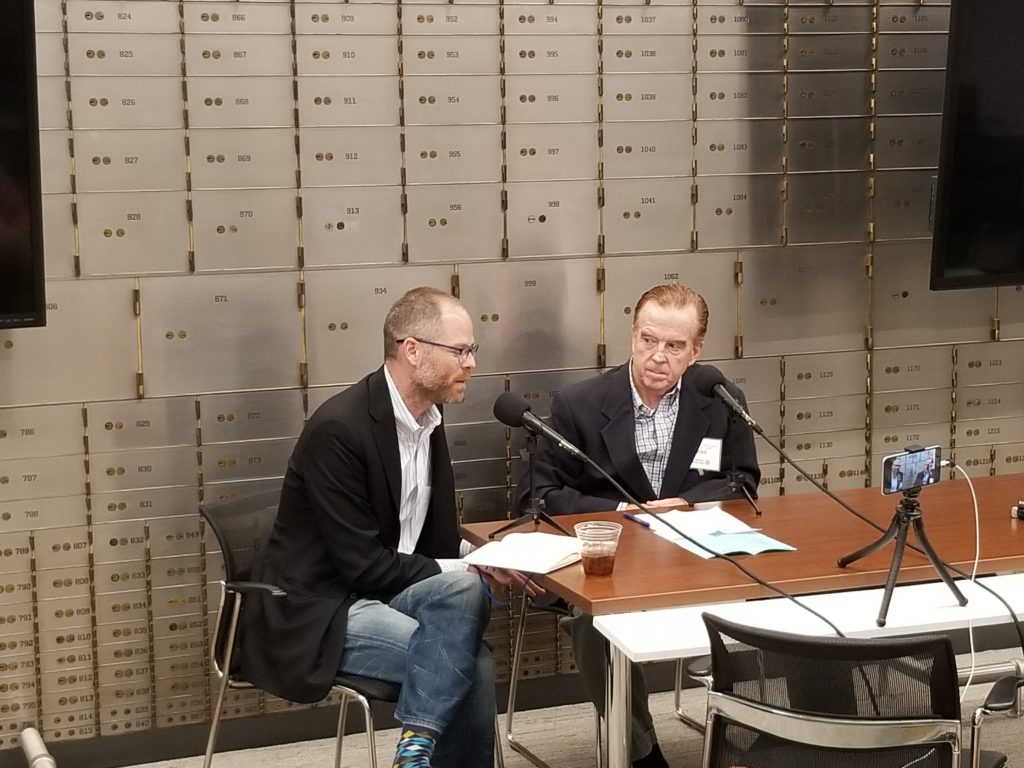 Reasons to join CMA include: leveraging your network/experience, participation in guest speaker series, access to 12 well-curated investment opportunities annually, full transparency, ability to allocate your own capital, and syndicated risk. Besides Reilly’s assurances of 100% guaranteed fun, there’s the opportunity to impact society – following Hunger Games, there was a 44% increase in female involvement in archery!