CFA Society Chicago Book Club: Rise of the Robots: Technology and the Threat of a Jobless Future by Martin Ford

Martin Ford, a software engineer by trade, projects a very 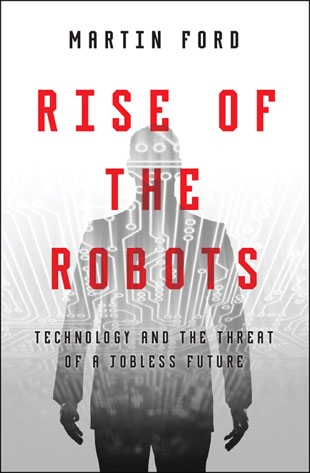 bleak future for the working prospects of humanity.  In a world that sees its share of apocalypse futures through Hollywood movies and TV shows, one can easily dismiss the premise of his book as another alarmist tale.  However, as the reader pushes through the seemingly endless examples of worker displacement in global commerce, it starts to sink in that maybe we are in for a rough time.  With the arrival of self-driving cars, automated tellers, digitalized customer service machines, 3-D printers, computer written news articles, drone delivery systems, and robotic assembly lines one starts to wonder if there is anything that cannot be automated.  Even in our own industry robo-advisors and computer trading systems are burgeoning industries.

The cause of all this technological advancement, in Mr. Ford’s view, has been the shortsightedness of capitalists driven by extending their bottom line by cutting expenses, increasing productivity and demanding less expensive labor.  After all, in a demand driven economy what happens if there is no demand as individuals find themselves short on the resources needed to buy the goods produced?  This new economy is driving inequality and it will only continue to get worse.  Education has been no panacea as graduates find themselves prepared for a world in which their skills are no longer required.  The top will continue to grow and the masses will be left to fend for themselves.

The reality is that policy makers and regulators are woefully behind the curve, and given today’s dysfunctional governments, why would anything change.  His solution is for an immediate $10,000 minimum guaranteed income for all.  How that is the magic number is lacking in derivation, but he defends the concept in order to keep the demand engine going in a jobless future.  He highlights a large array of taxes to pay for this transfer of wealth (carbon tax, VAT, wealth tax, technology tax, etc.), and defends the transfer to face the oncoming scenario where a majority of the population is not working.    Although the large majority of the change is out in the future, say 2050, we need to start now to ease the transition, and give the policy makers time to adjust the income guarantee and tax structure in the future.

At the club’s meeting we shared our ideas of this potential new world.   We felt that the book was a bit short on detailed specifics, as Charterholders who crave detailed data generally are when faced with a conceptual thesis.   But overall we felt the time spent was very enlightening.

First we talked about the time frame, mostly agreeing that it usually takes much longer than experts, like Mr. Ford, initially foresee.   However, we had difficulty denying that in the far future his reality of limited workers (those to keep the technology running) would not come to fruition.   We discussed changes in our industry that were examples of technological change.  The group contemplated and had big discussions on how does society, and namely democracy, work when the vast majority of voters are not productive.   In a short term practical discussion, we talked on how to position investments to take advantage of the changing world.

This was the second book we embarked upon looking at the future of technology this year (the other being Second Machine Age: Work, Progress, and Prosperity in a Time of Brilliant Technologies written by Erik Brynjolfsson and Andrew McAfee – see previous blog), and each highlighted that the world was changing very fast and society needs to start addressing the changes.  We all agreed these are very important challenges and would recommend everyone to read one or the other to get a sense of the dynamics that are changing our world.