Gender equality in the investment profession has been a hot topic in the industry lately, and it was addressed in detail during a January 10, 2019 Vault Series talk from Dierdre Nectow. Her firm Cambridge Associates, a large institutional investment consultant, is an outlier in the profession with half of its executives being women. Nectow discussed why her firm has much higher female representation than average, and what the state of women in finance is today.

To start, some good news: the number of women in finance is growing, yet as a percent of the workforce, women are still underrepresented. The United States is also a laggard when it comes to gender equality in the workplace, coming in at a dismal 51st place globally. One of the worst places for gender equality in finance can be seen in venture capital, where just 9 of the top 100 VCs are female. In contrast, the hedge fund industry has the best female ownership numbers, with 2% of AUM managed by women-owned firms.

Cambridge has been a bit different than its peers in hiring and promoting far more women than average in large part due to the philosophy of its co-founder Jim Bailey. His mother was a strong woman that had inspired him, and he saw women as an untapped resource. Hiring them could lead to outperformance in the industry. The firm has also spent time training workers on unconscious bias and has sought to make it safe to have those kinds of conversations while fostering more thoughtful attitudes around encouraging women and minorities in the workplace. Additionally, Cambridge has a mentorship program, a CFA women’s group and a new initiative called Prevail, which is designed to bring women at asset management firms as well as Cambridge clients and prospects together to talk about investing and issues.

Gender equality is becoming increasingly important for financial firms because pensions are using women and minority representation as a means to hire managers (or not hire ones with inadequate representation). Many companies have been hiring diversity officers to address this trend.  Cambridge is also scouring the landscape to find female and minority-owned managers due to demand. 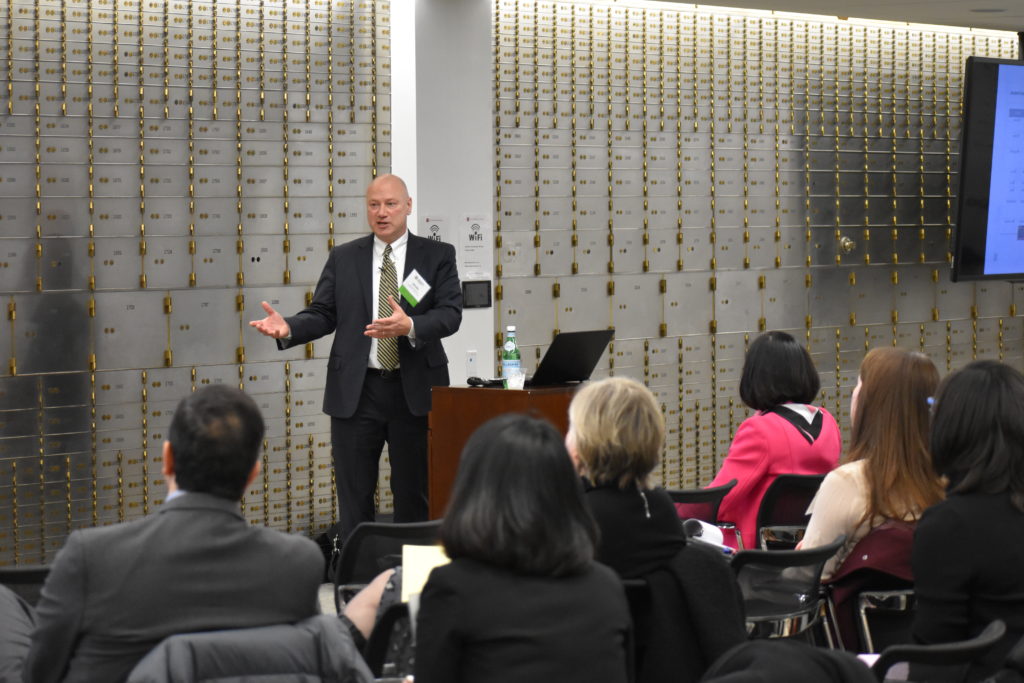 Following the introduction, David Baeckelandt, senior investment director at Cambridge Associates, took the stage to give us a brief history of women in financial markets, beginning with ancient firms. While by day Baeckelandt is a salesman at Cambridge, in his free time he is a history buff and has done extensive reading on the subject of women in finance.

Beginning in ancient Egypt, Baeckelandt said that Cleopatra was the first women to coin her own currency and put her image on it, which was an important step in modern finance. Another famous woman in finance milestone came with Queen Isabella funding Columbus’s voyage to the new world. Baeckelandt said that you could argue that Isabella led the most successful venture investment of all time, as the exploration of the Americas led to vast wealth for Spain. Another milestone took place in the coming years, with the Dutch East India Company being perhaps the world’s first IPO, and it had a number of women investors involved.

An interesting story of women in finance came from Abigail Adams, wife of John Adams. She made a small fortune trading bonds, which she turned into a small farm that she used to convince her husband to return to from Europe. Victoria Woodhull was another luminary who spotted an arbitrage opportunity between gold bullion and US dollars and used it to make a substantial profit. She then ran a financial firm with her sister, and her story is the subject of an upcoming TV series. Baeckelandt mentioned Hortense Friedman, a story familiar to many charterholders (there is an award given out annually in her name). A number of other women firsts took place in the late 1800’s, with the first women CPA’s and the first women investment bankers in the US.

There are a number of positive signs with respect to women in finance, yet there is much work to be done, particularly with respect to compensation. Public pensions and other large investors will continue to put pressure on firms to ensure adequate female and minority representation, and the march towards gender equality will likely continue to grow in the investment industry.